Morris was an unlikely recruit to Socialism. A wealthy romantic poet—”the idle 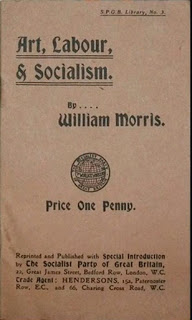 singer of an empty day”—whose love of art and architecture led him to become an interior designer, his friends were poets and Pre-Raphaelite artists, not economists or politicians.

Morris who was born in 1834 became involved in politics in his forties through his opposition to British support for Turkey in the Balkans. From then on, he spoke in public regularly, his lectures had as their central theme work and art, with titles such as ‘Art, Wealth and Riches‘, ‘Useful Work versus Useless Toil’ and ‘How We Live and How We Might Live’.

In 1883 he joined the new (Social) Democratic Federation, where he came in contact with Marxism. In opposition to H.M.Hyndman’s ‘absolutism”, jingoism and opportunism, he resigned from the SDF with the Avelings, Bax and others, and, in 1884. founded the Socialist League. He was as active in this as humanly possible: editing and writing for Commonweal, selling the paper on the streets, speaking at open-air meetings, and travelling the length and breadth of the country for public lectures. He also wrote A Dream of John Ball (1886) and News from Nowhere (1890).

But anarchist influence on the League developed till in 1890 Morris was ousted from the editorship of Commonweal and left. Illness led him to be less active politically, though no less committed to socialism as a member of the Hammersmith Socialist Society.

In 1893 he was promoting socialist unity and succeeded in getting the SDF and the Fabians to endorse the Manifesto of English Socialists, with its uncompromising statement of what socialism meant to the socialists of that period.

On this point all Socialists agree. Our aim, one and all, is to obtain for the whole community complete ownership and control of the means of transport, the means of manufacture, the mines, and the land. Thus we look to put an end for ever to the wage-system, to sweep away all distinctions of class, and eventually to establish national and international communism.

Morris argued for the establishment of a socialist party “with tactics as clear as their aims”, whose test of membership should be “explicitly declared agreement.” Ten years later, the Socialist Party of Great Britain was formed, emphasizing from the start that agreement on its aims and clearly stated principles was the sole test of membership. By contrast, the SDF, the ILP and others have all been swallowed up by the omnivorous, reformist Labour Party.

Only the Socialist Party has worked to achieve the sort of socialism described in that 1893 Manifesto as the united aim of all Socialists. It is also a measure of Morris’s influence that the larger part of one of his lectures ‘Art under Plutocracy‘ was published among the Socialist Party’s earliest pamphlets, under the title Art, Labour and Socialism (1907, with a new edition in 1962).

The Right to Enjoy Work

Central to Morris’s argument was his claim that art matters to everyone: art is the expression of pleasure in work. He claimed that work cannot be a source of pleasure under capitalism’s conditions. We need variety in our work, the chance to exercise skill and dexterity, working in pleasant surroundings, with the knowledge that our work is of real usefulness.

Morris spoke forcibly of the horror of factory monotony:

for a man to be the whole of his life hopelessly engaged in performing one repulsive and never-ending task is an arrangement fit enough for the hell imagined by theologians, but scarcely fit for any other form of society. ( ‘Useful Work versus Useless Toil ‘).

The result of the use of machinery for mass production, and the division of labour, meant as Marx and Engels wrote, that:

the work of the proletarian has lost all individual character, and consequently all charm for the workman. He becomes an appendage of the machine, and it is only the most simple, most monotonous and most easily acquired knack that is required of him (Communist Manifesto).

Morris, like Marx, pointed out that ‘labour-saving” machinery had never lived up to its name. In Marx’s view, “machinery, gifted with the wonderful power of shortening and fructifying human labour, we behold starving and overworking it”. Morris has been thought, mistakenly, to be hostile to the use of machinery. Actually, he welcomed its potential: “in a true society these miracles of ingenuity would be for the first time used for minimizing the amount of time spent in unattractive labour”. (’Useful Work versus Useless Toil‘). Given the choice, he thought people would prefer to do many things by hand, where they could get more enjoyment from this than from machine work. 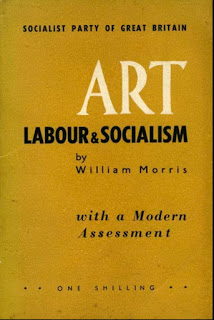 “In a true society”. Morris’s words were carefully chosen. Modern Capitalism is not a society in the true sense: “I hold that the condition of competition between man and man is bestial only, and that of association human”. He loathed “the system of unlimited competition where the best campaigning luggage a man can carry is a hard heart and no scruples”. He described capitalism as “a state of perpetual war”, characterised by appalling waste.

Waste is obvious enough in war and preparations for war. To Morris waste was also blatantly obvious in the everyday competition between capitalists for markets, leading to overproduction when markets become glutted “and all that fury of manufacture has to sink into cold ashes . . . Can’t you see the waste of it—waste of labour, skill, cunning, waste of life in short?” (‘How We Live and How We Might Live’).

Morris contrasted this with the advantages of a socialist system. A socialist society would be free from the need to produce armaments, to maintain a class of parasites, to compete. The burden of this waste of labour gone, people could enjoy the pleasure of working at an unhurried pace, not chasing the clock the way we do to-day.

Morris had strong objections to the filth and ugliness created by Victorian capitalism. In an early lecture, before he became a socialist, he protested:

Is money to be gathered? Cut down the pleasant trees among the houses, pull down ancient and venerable buildings for the money that a few square yards of London dirt will fetch: blacken rivers, hide the sun and poison the air with smoke and worse. (‘The Lesser Arts‘).

But there was more to be said, later, by Morris as a socialist:

It is profit which draws men into enormous unmanageable aggregations called towns . . .  profit which won’t take the most ordinary precautions against wrapping a whole district in a cloud of sulphurous smoke: which turns beautiful rivers into filthy sewers: which condemns all but the rich to live in houses idiotically cramped and confined, at the best, and at the worst in houses for whose wretchedness there is no name. (‘How We Live and How We Might Live‘).

Unfortunately, the environmental lobby do not recognize this simple and obvious fact. They do not attack the system of production for profit as the cause of pollution: they believe it is enough merely to regulate the system so as to curb its worst excesses.

Morris had contempt for this view. In his article ‘How I Became a Socialist‘ he wrote of his ‘‘hatred of modern civilisation”; it was intolerable to someone “with a deep love of the earth, and the life on it, and a passion for the history of the past of mankind”. What alternatives were there suggested by Liberals, Fabians, “gas and water socialists”?

Think of it! Was it all to end in a counting house on the top of a cinder-heap, with Podsnap’s drawing-room in the offing, and a Whig committee dealing out champagne to the rich and margarine to the poor in such convenient proportions as would make all men content together?

To those who argued for piecemeal reforms, he insisted that this would still be a system of slavery and misery. Reforming it would not bring freedom and happiness:

It is to stir you up not to be contented with a little that I am here tonight: you will not get the little if you are contented with it: you must be either slaves or free: you are slaves at present: bear that always in mmd. think of what it means: try to think of the life you might live and would naturally live if you were not forced into misery by your masters, and then I do not think that you can help combining together to tell the world that you must be free and happy . . .(‘Misery and the Way Out‘)