Have you heard the cheers from East Berlin
Where the wage slaves think they’re freed?
Yes, free’ to join NATO and the IMF
And go where accountants lead 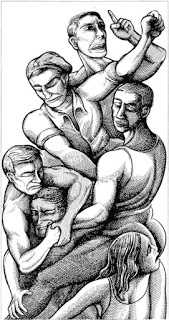 The hypocrites sing of Liberty
At last, Communism’s out for the count
But the Kremlin has as much to do with communism
As the Vatican with the Sermon on the Mount

Yes, the workers have shown they can change things
Loud sighs come from Lenin’s tomb
A spectre is haunting state capitalism
Let it spread to all other markets soon

So it’s bye-bye to the Bolshevik bootboys
The gulags are all up for sale
Hurrah for Big Mac and Burger King,
The Glasnost Building Society and the Daily Mail.

The Russian Empire is falling to pieces. The Berlin Wall has collapsed into the hated memory that all dividing borders deserve; in Poland the Communist Party has ignominiously lost power; in Hungary the Communists are so unpopular that they have had to change their name to disguise themselves; the Baltic states are seeking independence from centralised cultural dictatorship; the hated Bulgarian dictator, Zhivkov, has been forced to resign after thirty-five years in unelected control: even in Moscow crowds of workers have demonstrated outside the hated KGB headquarters. What once tried to sell itself as the dictatorship of the proletariat has been seen as a detested prison, enslaving the workers of Eastern Europe.

Socialists are pleased to see the demise of empires: not just the Russian one — there is an American Empire as well, as British foreign policy has all too clearly reflected in recent decades. We are told that what is happening in Eastern Europe is the death of socialism. What ignorant nonsense! Eastern Europe has never been socialist. (It has not even described itself as communist, claiming that it was leading up to such a future stage.) It has suited defenders of Western, mainly private capitalism, to label these police states as socialism. What better way of showing socialism as something to be avoided and resisted? There have been foolish Leftists and pseudo-communists who have made themselves ridiculous by trying to defend the East European states in the name of socialism. The Socialist Party rejected such nonsense from the start. Not once have we given credence to the claim that there are “socialist countries” in Eastern Europe – or in China, Cuba, Tanzania or anywhere else. These are state-capitalist nations. Socialists oppose them.

Opposed as we are to these phoney “socialist states”, we are not for even half a moment going to indulge in the mockery of logic which says that states which oppose these dictatorships are The Free World. There is no such thing as a free capitalist world. Capitalism is inherently unfree. Just as the Polish “Communists” used force to defeat the Silesian miners, so did the British Tories in their fight with the mine workers. In West Germany, where neo-Nazi politicians rise to power on the basis of widespread poverty and frustration, there is precious little freedom for the unemployed or homeless — less still if you are a Turkish “guest-worker” or a citizenless gypsy. How dare those who preside over the profit system in the Western nations call themselves the defenders of freedom! If what they offer is freedom, then the workers need to become unfree. As the opening lines of this article suggest, freedom means more than the chance to eat fast-food and join the queue for the dole — just like the “liberated” Western wage slaves.

There will be no freedom until wage slavery has been abolished. There can be no cheering over breaches in the Berlin Wall until all national barriers are torn down. There is no future for the working class in a re-unified Germany, any more than there is in a divided one. If the rapid changes of recent weeks demonstrate one thing it is that what once seemed unlikely — impossible, utopian — can happen.