At a time when we are constantly being told that the economy is doing well, that output is increasing and the living standards of those in work are going up, it is easy, perhaps, to forget that significant numbers of workers in Britain are not doing well, even measured by the miserable standards of capitalism. 10.43 million people are currently living at or below the Supplementary Benefit (SB) level; a further 7.61 million people live on incomes no more than 40 per cent above the SB level. In other words a total of over 18 million people are living in a state of poverty.

Life for claimants has never been easy: they have to endure the indignity of waiting for hours just to “sign on'”, of having to answer numerous questions about their lives in order to secure the “right”‘ to a pittance of benefit which is insufficient to meet even their basic needs — food, shelter, warmth and clothing. They have to live according to a set of rules laid down by the state governing what they do with their time — how many hours they can work, whether or not they can enrol for a course at college — and even, in some circumstances, who they can sleep with and on what terms. Put a step wrong and they are likely to find their benefit stopped by officials who are trained to regard all claimants as potential “scroungers ‘.

This month sees the introduction of a new system of social security benefits which will make life even harder for most claimants — less money, more hoops to jump through in order to get it and more conditions attached to receiving it.

The government claims that “only” 35 per cent of claimants will be worse off under the new system. Other (more independent) sources argue that the figure will be nearer to 60 per cent (including 81 per cent of couples with children, 74 per cent of lone parents and 90 per cent of pensioners) since the government’s calculations do not take account of the fact that any “gains” under the new system will be almost completely wiped out by simultaneous changes in the housing benefit system which will require everyone, including claimants, to pay the first 20 per cent of their rates. Insufficient allowance has been made for this in the scale rates which have been set for Income Support.

There are other measures in the new system which will make life more difficult for the poor: unemployed sixteen- and seventeen- year-olds who refuse to go on government “training ” schemes like YTS will be disqualified from receiving any benefits at all. And the unemployed will also find themselves the target of even more “special measures” designed not so much to get them back to work, but rather to intimidate them into removing themselves from the unemployment register and thus give the illusion of rapidly falling unemployment rates. People claiming sickness or unemployment benefit will have their entitlement assessed on the previous two years’ national insurance contributions instead of just the last year as at present. Those who leave a job without being sacked will find that they are deemed to be “voluntarily unemployed”, and therefore not entitled to benefit, for twenty-six weeks instead of thirteen weeks. Clearly these last two measures are designed to force people to stay in the same job no matter how unsuited they may be to the work and no matter how bad the working conditions.

The new social security system must be seen in the context of other recent changes which have also hit the poor. Since January 1987, unemployed people on Supplementary Benefit have only been entitled to have half their mortgage interest paid for them for the first four months on benefit — the darker side of the owner-occupation about which we hear very little compared with the empty rhetoric about the joys of being part of the “property-owning democracy”. Extra weekly payments for heating have been frozen since November 1985 and the level of Child Benefit — payable to 6.8 million mothers to help with the cost of raising 12.2 million children — has not been uprated in line with inflation.

So how should we view these new measures? Firstly, they are not entirely new — there has been a long history of punishing the poor, beginning with the imprisonment of those deemed to be vagrants and continuing, in the nineteenth century, with the harsh conditions of the Victorian workhouse. Secondly, poor people have always been divided into two categories: the “deserving” and the “undeserving”. The “deserving” poor have tended to be the elderly, widows, children. the sick and the disabled who have been seen as worthy recipients of charity for which they are expected to be duly grateful. The “undeserving” poor have tended to be the unemployed, viewed with mistrust, suspicion and fear, especially by the ruling class, nervous that those members of the working class so clearly without a stake in the present social order, might kick against a system to which they were marginal. The “undeserving” poor are not even regarded as suitable objects of charity. Rather they should be punished to deter others from voluntarily joining their ranks by making their position so uncomfortable (“less eligible”) that no one would choose unemployment rather than wage-slavery. Seen in this light the new system merely represents more of the same. 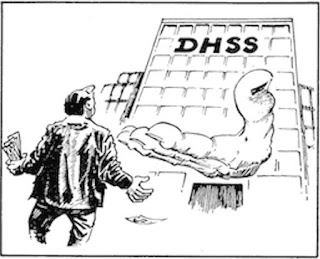 The government claims that, under the new system, benefits will be targeted towards those most in need — the “deserving” poor — although even this claim is pretty empty since many pensioners will be worse oft sickness benefit will be harder to get and child benefit has already been cut in real terms. The measures against the unemployed are, however, quite clearly designed to make their lives as uncomfortable as possible. Young people will be forced to work for their benefits; the differential between benefits and wages will be widened so that even very low wages look attractive compared with what can be got on the dole; and the grounds for the withdrawal or refusal of benefits to the unemployed will be increased. At the same time the new Family Credit system, because it will be administered by employers and paid along with wages, will give low paid workers the illusion that they are being paid more than they really are. In other words, the government is continuing its attempt to create a low wage economy.

The consequences of low wages and benefits is poverty, and poverty has far-reaching effects on people’s health, housing, personal relationships, sense of well-being and life chances. Already the children of the poor are twice as likely to die before their first birthday than the children of the rich. Death rates among the unemployed are 20 per cent higher than expected. Increasingly the unemployed figure in the statistics for suicide. In 1987, 100,000 families were homeless and the number of mortgage defaults was over 20,000 and rising. One million people are living in unfit housing. 5.6 million people exist on incomes below Supplementary Benefit levels because they do not get all the benefits they are entitled to.

This situation, already an appalling catalogue of misery and deprivation, can only get worse under the new benefit system. However, it would not be enough simply to reinstate the old system or even to up-rate the level of benefits — people would still be forced to live in poverty. What is needed is a new social order that does not require access to wage-slavery as a precondition for meeting basic needs and which does not punish those who are unable to work by forcing them to beg for crumbs. It’s time that all workers got up off their knees.