A Property Owning Democracy? Housing in Britain. M.J. Daunton (Faber and Faber. London 1987)
In the hierarchy of needs that confronts humanity, housing or shelter is a 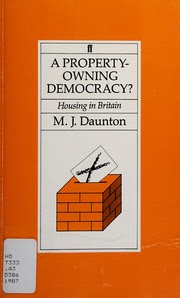 fundamental requirement. It has been at the forefront of Conservative Party thinking since 1979 as being the so-called right of people to own their own property. This has been a very fashionable concept but it ought not to be forgotten that the pattern of house ownership has undergone many changes, as Daunton points out in his conclusion:

There is nothing sacrosanct or immutable about the pattern of provision and ownership of housing . . . The last 70 years have seen the fall of the private landlord, the emergence of the owner-occupier to dominance, the rise and fall of the council house.

Owner occupation is not the dream that it might appear to be. We are confronted with soaring house prices, easy credit and high levels of foreclosures. It is no easy matter to enter the house buying market for the first time, particularly when your over-extended commitment may be gazumped by someone more fortunate or more foolhardy. We live in a period in which we are told that “popular capitalism” means access to share ownership allied to home ownership. More importantly it may simply represent an attempt to “break down the antithesis of profits and wages and to create an identity of interest between entrepreneurial success and social benefit”.
Public housing has suffered as a consequence of the image of the grotesque and repulsive high rise developments which have been seen as an economic and social nightmare. The changes arising out of the new pattern of home ownership have had their costs with private housing expenditure, in conjunction with fuel and power, accounting for 21.7 per cent of household budgets in 1981 compared to 15.8 per cent in 1964. The comparable figures for Germany and France for 1981 stood at 17.9 per cent and 17 per cent respectively. A consequence is that employers are pressurised to provide increased wages which conflict with the need to produce maximum profit. Nor should it be forgotten that, as employees, home ownership may represent a fetter to social mobility at a time when employment and home location are at variance. It should also be remembered that, according to the Nationwide Building Society, 30 per cent of the population cannot afford to move into owner occupation.
An attempt to manipulate the population through housing into the processes of the system may be the aim of current legislation. This is no new concern. The production of housing by industrialists in the nineteenth century can be seen as an attempt to instill control and discipline in employees. A national commitment to housing provision and standards can be interpreted as the state s concern with the social efficiency of the nation in contributing a healthy workforce to ensure the productivity of the firm. The debate in the nineteenth and early twentieth centuries between those arguing that wages should rise in order to pay the rents as against those advocating lower rents consistent with wages is typical of the reformist arguments which obscure the actual needs of those who simply continue to suffer. The reality was and still is that many workers cannot afford access to adequate housing.
The current Conservative hostility to council housing is a new perspective in the party. The Labour Party continues its commitment towards council housing although they have not rejected the apparent political popularity of private home ownership. What the Conservative Party has achieved is a reduction in council housing by limiting its commitment to construction and by selling existing stocks. Daunton argues that since 1980:

reductions in the contribution of central government to local authority housing, and changes in accounting procedures have led to an increase in the basic rent. This provides an added incentive to better-off tenants to buy, the increase being offset for the poorer tenants by means-tested rent rebates.

Owner occupation seems to be considered morally superior and to engender the correct social attitudes. This is not seen as being granted a stake in the system but of engendering social acquiescence as a result of mortgage commitments. One myth that Daunton does destroy is the notion that owner occupation is a “natural right”. The study shows clearly that the desire for property “can only be understood in the context of a housing market which was biased in certain ways by government policy” and that this has been an ongoing debate. The reality of home ownership has not drastically altered. Wealth and security of income represent the only guarantees of safeguards in this society. The promise of home ownership is only another burden to bear. As said above it may even be a guarantee of continued disadvantage in reducing mobility or by over-extending limited income in offsetting repairs, deterioration and debt repayments. We might even question the whole notion of owner occupation and its function within society. In 1980 Switzerland had 30 per cent owner occupation whereas the Philippines had achieved 89 per cent by 1970. West Germany had 37 per cent owner occupation in 1978 whereas Bangladesh had 90 per cent in 1981 Daunton argues that there is little similarity between owner occupation of a terraced house in Liverpool and a detached property in Surrey:

Yet even this is only partially correct. Those who are marginalised by the system may suffer disproportionately yet the relationship between individuals and access to property is the same regardless of the level of provision. A consequence is to create another divisive way in which competition is enforced between sections of workers. The struggle for access to property and participation in the process of maintaining property values diverts attention from the profit system. Any notion of an allegiance arising out of methods of housing provision or levels of that provision are as arbitrary and as contrary to working-class interests as allegiances based on race or sex. Houses are a commodity. As a commodity housing has been manipulated by the demands of different political persuasions. One irony of the present administration is that although advocating a free-market economy it has engendered “a financial system which distorts in favour of one type of asset”. The reality of housing as a commodity for the present administration in its notion of “popular capitalism” has been a reduction of commitment of central government to provide housing for those unable to buy. “Between 1979/80 and 1983/4 expenditure on housing was cut by 39 per cent in money or 89 per cent in real terms.” There has been a price to pay for the dream of owner occupation — a partial abandonment of those least able to survive in the housing market. For those participating in the struggle for owner occupation there is the increased burden of financing the venture and the likelihood of suffering the consequences of social acquiescence to a system whose existence is contrary to their real interests.
Philip Bentley