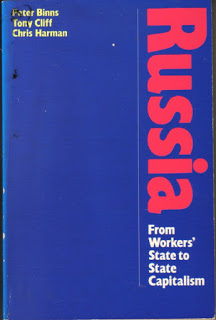 Most Trotskyites hold that Russia is a “degenerate workers’ state”. The SWP, however, of which these three authors are leading members, holds that Russia is state capitalist. So does the Socialist Party, but there is a fundamental difference between our points of view. As the title of this book shows, they hold that Russia degenerated from some sort of working class or socialist regime into state capitalism whereas we hold that capitalism was never abolished in Russia, not even in Lenin’s day. and that state capitalism developed there as the leaders of the Bolshevik party responded to the pressures of material circumstances, eventually evolving into a new ruling class monopolising the means of production through the state.

The SWP deny that Russia was state capitalist before 1928. So what was it up till then? Basically, as this book — a reprint of articles originally written in the 1970s — shows, they are saying it was the “degenerate workers’ state” that the more dogmatic Trotskyites still claim it to be. But this view is just as absurd in relation to pre-1928 Russia as the SWP admit it to be in relation to post-1928 Russia. The ownership of industry by a one-party state, buying and selling, the wages system, capital accumulation, international pressures, all existed just as much before, as after, 1928. The only difference was that by 1928 Trotsky had been definitively excluded from the Russian ruling élite with no hope of being able to get back into its ranks again. In other words, the SWP’s explanation for the coming of state capitalism to Russia is political rather rather than economic and so on a par with the absurd Maoist view which dates the “restoration of capitalism” in Russia from the coming to power of Khrushchev after the death of Stalin.

The fact that the SWP fail to recognise the capitalist nature of the Russian economy before 1928 and in fact attribute to it some minimal “socialist” character must inevitably cast doubt on their conception of socialism. For what they are saying is that what made the pre-1928 Russian economy “non-capitalist” was the more or less acceptable nature of the then political system. This implies that another political change, both in Russia and the West, if carried out by insurrectionary means, could establish “socialism” even if the essential features of the capitalist economy — particularly wage-labour and capital accumulation — remained. That this is indeed the SWP view can be seen from their recent pamphlet The Future Socialist Society which says that one of the first things to happen after the socialist revolution is that wages will be raised. As we are also told that we shall all become employees of the state then it is clear that their alternative to Russia-type state capitalism is . . . another form of state capitalism. Their so-called “socialist revolution”, then, is no more than a radical change in the political management of the wages-prices-profit system that is capitalism.

Having said this, there are still one or two useful insights in the book. For example Harman’s observation that from the second quarter of the 19th century onwards all ruling classes in societies based on non-capitalist modes of exploitation were subjected by the world market to immense pressures to “change their mode of exploitation so as to subordinate everything else to the accumulation of means of production in order to accumulate other means of production” if they were not to be dominated by those states which had already adopted the capitalist mode of production.

Harman cites Japan as the only fully successful example of this in the 19th century when, in the 1860s. a section of the feudal ruling class “took control of the state and used this control to subordinate the whole of Japanese society to the development of industry on a capitalist basis”. He then spoils it all by adding:

In 1929 the Stalinist ruling stratum in Russia faced exactly the same dilemma: follow the logic of capitalism and accumulate in order to further accumulate or face subjection to international capitalism.

But. once again, what’s so special about 1929? Are we to believe that this same dilemma did not present itself to the Bolshevik government right from its seizure of power in 1917? Lenin himself (who the SWP claim as one of their mentors) entertained no such illusion and openly advocated, in 1918 and again in 1921. state capitalism as the only way forward for Russia, while waiting for the world socialist revolution he mistakenly believed to have been imminent.

In the light of the Marxist perspective glimpsed by Harman, Russian Bolshevism can be seen as a reaction to the failure of the Tsarist ruling class to successfully carry out the subordination of Russian society to the capitalist imperative to accumulate capital out of the exploitation of wage-labour. In other words, the Bolsheviks — even if they did come to power through a social revolution involving a high degree of participation by the relatively small industrial working class essentially carried through the task of “the development of industry on a capitalist basis” that the old ruling class had proved unable to do. And this began under Lenin and Trotsky in 1917 and 1918, not just in 1928 and 1929 under Stalin.