The newspaper business has been going through some changes recently, most noticeably the movement of Murdoch’s News International to Fortress Wapping. In the process, Murdoch managed to engineer the sacking of 5.000 printworkers. His titles, including the Sun and The Times, are now being printed by members of the electricians’ union.
Murdoch’s manoeuvres have brought much condemnation from many Labour MPs, outraged at his tactics in deceiving the workers and saving on redundancy payments (although these tactics can hardly be said to be new to capitalism). The Sun has long been a target of left-wingers, who find its gutter journalism, cheap titillation and especially its patriotic. pro-Thatcher jingoism. offensive.
Murdoch’s competitors in the newspaper business are concerned about the increased levels of profitability and efficiency he has gained. Robert Maxwell, who owns the Mirror Group, is in the most direct competition with Murdoch: he produces the same kind of comic. The Mirror also has a high proportion of scandal stories although, in an effort to appear refined, Maxwell recently ordered his Page 3 Lovelies to cover up their nipples.
In order to meet the challenge of News International, Maxwell recently imposed a change in working practices at his two publications in Glasgow, the Daily Record (which still shows nipples) and the Sunday Mail (which doesn’t). The workers at these papers did not fancy a deterioration in their working conditions and being forced to produce an Irish copy of the Daily Mirror. Maxwell decided that these workers had sacked themselves — strange behaviour with four million on the dole so he shut down his Scottish operation and locked the workers out.
The reaction of Labour MPs in Scotland was not to condemn Maxwell despite his high-handed management. Murdoch was called the Dirty Digger, and an interfering foreigner (after all he is Australian). But the shadow Secretary of State for Scotland, Donald Dewar, John Smith and many other Labour MPs expressed “concern” over the breakdown in “communication”, and stressed the need to get these rags, which for years have spread anti-working class filth across Scotland, back to giving their “specific contribution” to the Scottish political scene.
So what is the difference between the lies of Maxwell’s distorting Mirror and the Wapping-great lies of Murdoch’s Sun that warrants such selective outrage from Labour MPs? Of course it could be the fact that Murdoch is a supporter of the Tories, while the “socialist millionaire” supports the Labour Party and so is courted by Kinnock & Co. at their conferences. But Labour would never betray workers’ interests just to get cheap political support, would they?
The effort of the Labour MPs managed to get Maxwell back to the negotiating table, and the Daily Record back to the gutters. But not for long — while workers allow parasites like Murdoch and Maxwell to remain in positions of power and influence then we will continue to be insulted and insecure.

At the 27th Congress of the Communist Party of the Soviet Union held in February, the Russian leader Mikhail Gorbachev spent much time talking about the need to reform the Russian economy. In his calls for expansion, modernisation and efficiency he sounded astonishingly like Thatcher. Factories which regularly make losses are to be allowed to go bust: “The state will not be responsible for their debts and losses”, he said (all quotes. Guardian, 26 February). This could be Thatcher talking about “lame- ducks” being a burden on the Great British Taxpayer.
Managers and workers who produce unsold goods that end up in warehouses are to suffer loss of pay and bonuses. Wage increases must be earned — they must be related to the quantity of work done. Again, Thatcher has had a lot of experience of berating workers for taking “unearned” pay rises. Since the workers produce all the wealth in society, it is difficult to see how their wages — a fraction of what they produce anyway — can be unearned.
Gorbachev also called for less central interference from the state planning agency Gosplan, in the day-to-day running of the economy. They must “allow industrial management to get on with the job”. The “right” of management to manage is a common cry of government ministers and of parasites such as Murdoch and MacGregor. What this “right to manage” usually amounts to is pay cuts and job losses.
Many of the current problems with the Russian economy were blamed on failures of the past. The stagnation and inertia, bureaucracy and corruption of the Brezhnev years in the seventies are the root of today’s problems, according to Gorbachev. This is one that politicians often rely on. The current problems are blamed on the failures of the previous administration, whether Labour or Tory, Republican or Democrat, or the Communist Party of the Soviet Union or the Communist Party of the Soviet Union.The fact is that capitalism produces problems by its very nature, regardless of the extent of state control. Whatever reforms Gorbachev rushes through it is clear that the workers in Russia will do the hard work and suffering, while the ruling class relax in their dachas and bemoan how lazy the workers are.

The strangest thing about Gorbachev’s speech to the Congress was the fact that he cracked jokes (about Lenin!). Of course Mikhail — like “our” Maggie or Neil — is very conscious of his image, liking to appear as a humorous, concerned person. He’s even been compared to the “great communicator” (or bullshitter). Ronald Reagan. Now what’s the Russian for Saatchi and Saatchi? 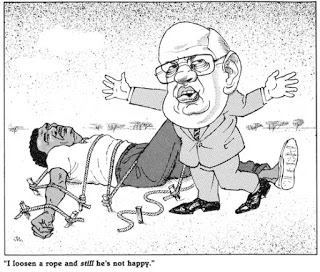 Whitewash
How much longer can Botha and the ruling National Party in South Africa get away with promising reforms and then failing to deliver the goods?

Botha’s latest promise was made in a recent speech in which he admitted that South Africa had “outgrown the outdated concept of apartheid”. But he then went on to restate the belief basic to apartheid: that South Africa consists of separate tribal peoples or nations, each of which must have jurisdiction over its own affairs while the whites retain overall control. What this means in practice is the policy of “independent” tribal homelands for the blacks — Bantustans — poverty-stricken reservations with nominal autonomy which provide a ready supply of cheap black labour for the predominantly white ruling class.

The “reforms” outlined by Botha include the restoration of South African citizenship to those who lost it when the Bantustans were granted “independence”; the extension of self-government to the remaining non-independent homelands; limited rights of property ownership for blacks in the townships; amendments to the Pass Laws so that everyone in South Africa would have to carry identity papers; and the establishment of a new National Advisory Council that is to include blacks.

Most black workers in South Africa will recognise these “reforms” as worthless, since they leave the main institutions of apartheid intact. For example, the proposed amendments to the Pass Laws would still enable the police arbitrarily to arrest blacks for being in the “wrong” area and it is likely that black access to the cities will continue to be dependent on a job and accommodation. The proposed Advisory Council represents the same kind of tokenism as the constitutional amendments which gave Indians and Coloureds separate national assemblies while the real power remains in the hands of the white ruling class.

Free speech
You would have thought that the Left had learned its lesson from last year’s events at North London Poly when the Socialist Workers’ Party orchestrated such favourable publicity for the National Front by trying to prevent Patrick Harrington from attending classes. But no, the Right are yet again being granted the moral high ground as defenders of free speech, as this year’s intake of students conforms to the Left stereotype. Having found their feet as student radicals, they are now attempting to prevent selected demons of the Right from speaking on university and polytechnic platforms. Michael Fallon, Tory MP, was given a rough ride at Sunderland Poly, as was John Carlisle at Bradford University. An invitation to the philosopher of the new right, Roger Scruton, was withdrawn when Leeds City Council said that they could not guarantee his safety. And even tapes of American anti-Semite, Louis Farrakhan, were banned at the South Bank Poly in London.

Meanwhile, students at Bristol University have just discovered that John Vincent, Professor of History, has an alter ego as a reactionary columnist for the Sun newspaper. The word went out and the Left picketed his lectures, resulting in the involvement of the police and local publicity more favourable to the “victimised Professor Vincent” than to the “lefty student yobs”. Why, you might ask, if it is his column in the Sun to which they object, are they picketing his history lectures at Bristol University? Their argument is that he is using his position as an academic to lend spurious credibility to his journalistic efforts. But never mind the finer details — picketing is so much more fun than lectures and, after all, John Vincent is right wing and therefore a legitimate target for emotional tirades about racism, fascism, the Sun newspaper . . . And let’s not worry too much about free speech, or the damage being done to serious opponents of capitalism.