How to arrest the police 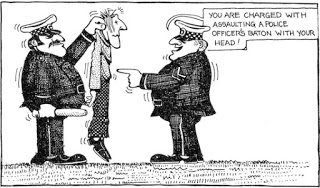 “helping the police with their enquiries” will be unsurprised at the case of the five youths beaten up by policemen in the Holloway Road and by the attempt to cover it all up. It is true to say that illegal violence is freely used by the police — perhaps to induce some hapless suspect to put their name to an incriminating statement, or to put down over-effective pickets, or even at random on the streets. In the first issue of Today (whose proprietor has cause to be thankful to the police) Derek Jameson protested: “The streets of London are becoming like New York with young coppers running wild”. That may be a typical journalist’s overstatement but what can’t be denied is that recent events have not helped to give the police a happy image. Last year Scotland Yard paid out a record £207,537 in damages to people who had been assaulted or “improperly” treated by their officers. One case outside London involved the Manchester police in agreeing damages of £2,000 to a deaf, disabled man who was beaten up by three policemen and left bleeding on a cold December night. What is remarkable about the recent notorious events is not so much that they happened as that they were publicised. Nor is it exceptional, that the police should find it difficult to unmask culprits in their ranks. Blair Peach was bludgeoned to death by a member of the Special Patrol Group when the streets were swarming with police yet his killer has never been officially identified.

In spite of these examples — and others like the police operations during the coal strike (of which more later) or how the Wiltshire police dealt with the Stonehenge hippy convoy or the incidents which sparked off the riots in Brixton and Tottenham — British capitalism cannot be described as a police state. Whatever happens behind the cell doors, there is a legal protection of the rights and safety of suspects in police hands. When the police deny those rights they are acting outside the law. whereas a police state would legally sanction any degree of repression. In practice this may well be the sort of thin distinction to wring hollow laughter from anyone who has been interrogated by the British police, or who knows of someone who has mysteriously died while in police custody. So yes. there is a problem; how do we deal with it? How do we control the police?

A favourite response of the left wing to these questions is that the police should be made “accountable”, should carry out their job through popular consent. In fact “police accountability” and “policing by consent” are slogans almost as popular among left-wingers as “Second Front Now” and “Nationalise the Mines” used to be. In practical terms, they mean that the police should be answerable to, and so controlled by, some elected local body. Through a little disconnected logic, the argument then proceeds to claim that this would make the police democratic because they would be operating within the wishes of the majority. The case was put by Margaret Simey, who chaired the Merseyside Police Committee:

I believe that over the past five years, the Merseyside Police Authority can claim to have explored the day-to-day actuality of whether, and if so, how policing by consent can be made a reality. All the work we have done in scrutinising our own responsibilities for finance and administration and in striving to involve the public in the provision of the service, convinces me that policing by consent is practically possible. (Guardian, 7 March 1986).

Hacking through the luxuriant verbiage of that statement, we come to an awkward question: if the people of Granby Ward in Toxteth, which Margaret Simey represents as a County Councillor, should decide as a majority to eke out their dole by helping themselves to essentials like food and clothes, how would this relate to policing by consent? Would the police themselves consent to it? The theory sounds cosily reassuring but, like all left wing nostrums, it is crippled by some basic flaws.

There are in fact examples of the police operating under what might be described as majority consent and control but these are not helpful to the likes of Margaret Simey. In the Deep South states of America the police have often been open and assertive agents of racist repression. Far from protecting human rights and safety they have been known to collude blatantly with, or even themselves commit, the murder of black people or of civil rights workers. And this happened although the major law enforcement officers — police chiefs, sheriffs — were popularly elected. Because the majority in the South wanted blacks to be repressed, the police were more or less mandated to act as racist thugs. Such examples as exist in this country are no more helpful. The GLC had something called the Police Committee which could be relied on to fulminate against excesses but which had no real influence and which the Metropolitan Police, which is answerable to the Home Secretary, effectively ignored. It is a similar story in those places — like Simey’s Merseyside — which had Police Committees with closer links with the police. They were in persistent conflict with their chief constables — notable among them were Anderton of Greater Manchester and Oxford of Merseyside — who took little account of the committee’s opinions. Simey described this:

The unwelcome truth is that though much bombast is uttered about the principle of accountability. the stark reality is that the machinery for measuring that it works in practice has rusted up to the point at which it is virtually unusable.

Which brings us to the question that, if the police are to be accountable, who or what are they accountable to? The left wing argue that it must be to the community. But it is the job of the police to arrest and prosecute people for stealing, for taking wealth which they as a class have produced but to which they have no right unless they can buy it. When the police are called to arrest someone for shoplifting they are not acting in the interests of the community, which demand that all human beings have free access to things like food and clothing. They are acting in the interests of the owners of the shop.

Another example is the work of the police in helping to break last year’s coal strike. Since the miners were defeated the National Coal Board have pressed on with their programme of closures. Nearly 30 pits have ceased production and over 35,000 miners have left the industry, with many more in prospect. Yet while the coal lay uncut and the miners were being labelled as redundant, the suffering among old people during the cold during February exposed — as if this was again necessary — how much need there is in the community for fuel. One survey (Sunday Times, 2 March 1986) of pensioners’ homes in Croydon found that on average their living rooms were heated to 14.7°C and their bedrooms to 8.8°C (at the same time the House of Lords was enduring 21.1°C). In such conditions old people die of the cold — through hypothermia. chest infections, accidents caused by numbed senses. Hospitals were overwhelmed; one in Scotland was expecting 20 cases of hypothermia a day and a consultant geriatrician in North London predicted an extra 8,000 deaths for every degree below average in winter (Observer, 2 March 1986).

So whose interests were the police asserting, when they helped to break the strike? Certainly not those of the pensioners shivering and dying in their homes, nor of the nurses and doctors battling against the effects of cold-induced sickness and accidents. They were asserting the fact that under this social system coal and all other wealth will be produced only when it is profitable, regardless of human need. They were reminding us that we live in a society based on the class ownership of the means of life, which means the denial of access to wealth — coal. food, clothes or whatever — to the majority.

It is quite clear that there is a conflict between the function of the police and the real interests of the community. The police exist to enforce the minority property rights of capitalism, with all that they entail — the privileges of the parasitical minority, the poverty of the productive majority. That is why the police cannot encourage people, however needy, to help themselves to wealth. That is why, when the miners resisted the capitalist principle that the ”uneconomic” production of coal must cease, they met the opposition of the police, one of whose functions is to enforce that principle. Those functions ensure that the police cannot be a democratic organisation. They cannot, for example, publicise that they are about to raid the home of someone suspected of handling stolen property. They cannot consult every constable whether they would agree to go out to intercept a bunch of armed robbers. Bodies like police committees, and left wing theories like “police accountability” and “policing by consent”, exist on the false assumption that capitalism can be refashioned into a benign, humane, open society and that the capitalists’ privileged position can somehow be related to the interests of the community. These are clashes between reality and delusion, between the deceptions of reformism and the inexorable demands of a society based on class ownership. What it amounts to is that the police are accountable — to the class who employ them and to the privileged interests of that class. Policies for reforming the police out of their character conflict with that reality and are doomed to impotence. Discussions about how to control, or democratise, the police are futile.

There is one last vital fact to be considered. At every election the working class vote for capitalism to continue — which means for class privilege, state coercion, police repression, to continue. People like Margaret Simey airily ignore that fact but it will not go away until the working class face the realities of capitalism and of their own power to abolish the system. But the grim outlook is that many more workers will be beaten and killed by the police before our class comes to trust themselves in a truly democratic society.