In 1963 the Local Government Act set up the Greater London Council. At the 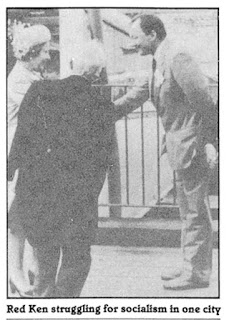 time the Labour Party opposed the creation of the GLC, arguing that it widened the boundaries of the old London County Council too far and would lead to a built-in Tory majority. In fact, Labour won the GLC election in 1964 and that put an end to their campaign against the GLC. Twenty years after the 1963 Act the Tory manifesto for the 1983 General Election proposed the abolition of the GLC on the grounds that it was “wasteful and unnecessary”. This contrasts with earlier Tory attitudes to local government:

There are plenty of people who feel that local administration is wasteful and extravagant and hold that there should be a much tighter degree of Treasury control over spending. I pray you will never lend substance and ammunition to that charge.
(Earl of Home, quoted in Local Government Campaign Notes. 15 April 1954. p.8)

Again, in a document entitled Background Material for Election Address, issued by the Conservative Party Central Office in 1953 it is stated that

Conservatives believe that local government should be local and that decisions on local matters should be made with reference to local conditions, not in obedience to the rigid direction of a central . . . machine.

So. why the change in positions: why in 1983 did we see the Tories advocating the elimination of the GLC as a local government and the Labour Party fighting to keep it? The immediate answer is party-political. The fact is that the Tories lost control of the GLC, as well as the Metropolitan Counties which it also sought to abolish, and. rather than having a local government marching in the opposite direction of a powerful central government, it decided to abolish the former. This political distaste for the GLC was admitted in a speech by the Tory Opposition leader on the GLC, Richard Brew:

Leaving aside the ideologically committed, he (Livingstone) is seeking out the feminists and the gay activists. He is topping up these with the ethnic groups and the Irish. He is mobilising the anti-police brigade and he is seeking out the pressure groups CND. Babies Against the Bomb and so on. In other words he is going for the nutters.

And when “the nutters” are in a majority you abolish elections. They have psychiatric hospitals for such “nutters” in Russia and Brew shows that the Tory reasoning in abolishing the GLC was not very different from any other centralised state which refuses to hold elections because the electors cannot be trusted to vote properly.

The Labour-led “Save the GLC Campaign” has been a popular reformist movement in London and, as Edward Heath pointed out in the House of Commons, the Tory decision to abolish the GLC has had the totally unintended effect of making Ken Livingstone one of the most popular politicians in London. If the polls are to be trusted, it seems that abolition is sufficiently unpopular to result in serious Tory losses in London constituencies in the next General Election. Patrick Jenkin, the Minister responsible for pushing the abolition Bill through the Commons, is now politically ruined and the government appears to have handed the Labour Party a gift.

As the GLC is buried a myth is in danger of being born: the myth of “GLC socialism”. It is a common belief amongst many leftists that the GLC under Livingstone was responsible for making moves towards socialism in one city, and the further we drift away from the period in which this is supposed to have happened the more elaborate the legend will become. Let us look at what these so- called socialist measures were which the GLC implemented.

Firstly, they lowered the fares on London Transport, only to have this action ruled illegal by the capitalist Judges. As we pointed out at the time of the so-called Fair Fares campaign, socialists want no fares, not low fares. The trains, the buses and the rest of the transport system should belong to the community as a whole and when they do we will not have to pay to use them. Such free access, and nothing less, will be socialism. The GLC move to lower fares by rate subsidy was an understandably popular reform and was in line with transport policies in other European capital cities. But it was not compatible with the profit system and was thus ended by the central state. This is the inevitable fate of any city government which attempts to impose rules upon capitalism which are unacceptable to the capitalists on a national level.

Secondly, the GLC gave grants to several organisations of workers seeking facilities which would not be granted by central government. We are not denying that many of these facilities were put to good use (we refer to those which were not politically reformist causes) and that the GLC won many friends that way. But, as GLC defenders were at pains to point out throughout the anti-abolition campaign, these grants to radical groups amounted to only 0.6 per cent of their annual budget. In a socialist society women would not need to fill in numerous forms and negotiate politically with leaders before they can have a centre to meet in; if Irish people living in London require a cultural centre they shall have free access to the space and buildings available and will not have to be beholden to some government body in a socialist society.

Thirdly, the GLC has acted controversially in declaring London a nuclear-free zone. What exactly does such a declaration mean? Are we to expect that London will no longer be a target for nuclear missiles because of this absurd nominal gesture? In fact, if the GLC had wasted less time upon such pious nonsense and a little thought on considering the cause of war (namely, the capitalist system) workers could now be organising to abolish the cause of war rather than wasting time pretending to be free from its effects.
Fourthly, the GLC set up the Greater London Enterprise Board (GLEB), the “socialist” function of which was to persuade capitalists to invest more money in exploiting London’s workers and to convince unemployed and other workers that by setting up capitalist co-ops they could succeed in business. This is hardly the action of any movement intending to replace capitalism with socialism.
In fact, there have been some positive changes in London in the early 1980s. but these have not happened because politicians have legislated for them. Workers in London are taking a more conscious attitude to racism and to the problems of women; after many years gay men and lesbian women are less afraid to come out in the open than they used to be; community groups, such as tenants’ organisations, are trying to take more social responsibility over their areas — although they still do not own or control their areas and their efforts are all too often hijacked by Labour opportunists who use workers’ organisations for purposes of vote-catching. There are some positive developments, but that is because workers are in certain respects becoming more socially conscious and there is little doubt that such consciousness will continue to develop with or without the GLC.
The myth that the GLC somehow humanised capitalism in London must be resisted, for if it wins workers’ minds we will see yet another political diversion of workers organising to return to “the good old days” of the GLC. The fact is that in those “good old days” the GLC was evicting council tenants who could not afford to pay their rents, NALGO and NUPE workers employed by the GLC had to fight hard to exist as wage slaves, there was widespread deprivation within London and the GLC, like any other capitalist government, was impotent to tackle it.
It is a major waste of energy for workers claiming to want socialism to be fighting to retain a level of government. Socialists are opposed to all government, because the state, both local and national, is but the executive committee of the capitalist class. Why should workers campaign for the right to be governed? Of course, we must see through the sordid political opportunism which led the central government to abolish the GLC and we must recognise the contempt which the capitalists have for democracy when they are losing the elections. But it should be remembered that there is no government or ruling class which could abolish democratic facilities once workers have a class-conscious interest in democracy. It is the workers who elected the capitalist national government, just as it was workers who elected the capitalist local government of London. As soon as workers are socialist-minded we shall democratically conquer both local and national governments and these will be used to dispossess the capitalist class of their wealth and power. There will be no socialist state: local and national government will not wither away in a socialist society, but will be abolished because in socialism there will be no propertyless class to be governed and coerced.
Socialists possess no blueprint as to how administration will be conducted within a system of common ownership and democratic control, but two points are quite clear. Firstly, socialism will not be a centralised society. After all, we are talking about a world society (socialism cannot be established in one country or city) and it is inconceivable that there will be a single global administration. Secondly, it is very likely that there will be plenty of opportunities for local community involvement in decision-making in a socialist society, with local bodies and global bodies feeding ideas and initiatives into one another on the basis of dynamic democracy. But not until society and everything in it belongs to the people who inhabit it can we speak of genuine democracy, so instead of shedding any tears over the passing of the GLC and the Metropolitan Counties workers should think enthusiastically about a society in which democracy means a lot more than the right of Ken Livingstone to sit and make decisions in County Hall.
Steve Coleman