Book Review: A Mirror for Socialism 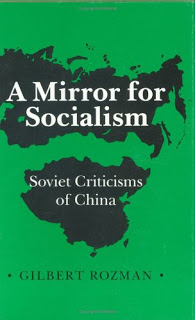 Gilbert Rozman: A Mirror for Socialism: Soviet Criticisms of China. Tauris. £24.50
In 1960, after some years of increasingly bitter argument, Russia and China put an end to their alliance and became openly antagonistic. The border dispute between them eventually broke out into actual fighting, and their “foreign policies” went in very different directions. The ruling class in each country had to justify the way in which a former staunch ally had become an implacable enemy. Chinese writers spoke of Russia as “social-imperialist” and “state capitalist”, though without fully exploring the implications of this latter expression. Russian writings on China are the subject of Rozman’s book, the main thesis of which is that these writings are as much concerned with Russia as with China
Nearly all the work surveyed is available only in Russian. It is aimed, then, not at a world audience but at educated Russians, and so tends to focus on aspects of society which are most meaningful to them. Charges that China is bureaucratic, over-centralised and militaristic no doubt strike a chord in the hearts of many Russian readers. Given the impossibility of discussing shortcomings of Russian society in the official media, polemics on China provide an opportunity for coded discussion of how things can go wrong in an allegedly socialist society.
Rozman in fact discerns two main groups of writers, based at different research centres. The orthodox group emphasise centralism and a strong “Communist” Party, and reject any material incentives or further expansion of the private economic sector. The “reform” group are more interesting, partly because their work on China is more detailed and better researched. But in addition it is possible to extract from their writings a kind of agenda for reform in Russia, involving: defence of individual rights, no forced collectivisation, far less censorship, emphasis on merit in appointments to important posts, and a scaling-down of military expenditure. This programme is hardly going to have the current rulers quaking in their fur-lined boots.
Another interesting point which emerges from Rozman’s discussion is how similar Russian criticisms of China are to Western “anti-communist” criticisms of Russia. So it may be a bit disconcerting to read Russian attacks on China as dictatorial, exploitative and totalitarian, but these labels are not in the least original.
The content of the Russian criticisms are mostly pretty predictable and unilluminating. One point worth mentioning concerns the Cultural Revolution of the late sixties (which the Russian writers all see as an unmitigated disaster). One writer claims that China’s “national bourgeoisie” (descended from the pre-1949 private capitalists) benefited from the Cultural Revolution in that their wealth was left untouched and they were not subjected to the same kind of violence as many workers and peasants. Since Mao’s death, the ex-capitalists have had more property returned to them and have generally done very nicely.
Of course, none of the Russian critics go so far as to claim that China is a state capitalist country. In view of the obvious similarities between Russia and China, this would be just the kind of revelation that the Russian ruling class do not want the mirror to produce.
Paul Bennett