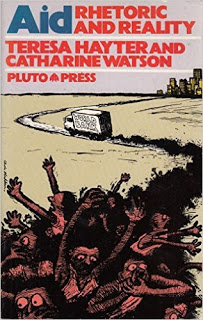 Aid – Rhetoric and Reality by Teresa Hayter and Catherine Watson. Pluto Press. 1985. £4.95.
This is a useful book provided that it is treated as a source of information only. It is a follow-up to Aid as Imperialism written by Teresa Hayter about ten years ago.
When talking of aid the authors are not referring to charity-type organisations such as Oxfam. These bodies do get a few lines but only to point out how small their contributions actually are. The concerns covered are the IMF, private banks, governments and above all the World Bank, on whose payroll Catherine Watson spent one year. Anyone who thinks these entities are a suite of giant Oxfams is in really great need of the contrary information provided here. In fact they are above all investment agencies concerned with getting a return on their capital outlay. Thus such “aid” is not channelled to the needy, but to capitalist bodies to generate profits out of the labours of the working class.
These loans are mainly made to emergent capitalist governments who see themselves in need of finance for the development of their own economies. Although the authors mention that debt rescheduling can be a profitable exercise for some, generally speaking harsh terms are imposed on defaulters who are less likely to be favoured should they apply again. In fact the lending organisations go considerably further than this and interfere freely in the management of recipient countries. This is in many cases deliberately designed to hamper independent development by rising capitalist groups. Aid is refused to industries which might in time compete with those in developed countries, and there is frequently an emphasis on developing the export of primary products like cocoa and rubber.
Although not without exceptions, a distinct bias against state financed ventures is noted. This may arise in part from prejudice on the part of US capitalists who provide the bulk of the funding. However as the thrust is not just to favour private capital but foreign private capital this is further evidence of an unwillingness to allow independent development. Many Third World countries choose the state capitalist route to allow a more rapid accumulation of capital. In any case if the “aid” organisations see their interests lying in a particular course of action the local capitalists have eventually to go along with this or do without. The net result is that these underdeveloped states remain in a neo-colonialist position, providing cheap raw materials for the more developed countries. The main beneficiaries in the recipient countries are local elites rather than the native capitalist class as a whole.
It is a reasonable deduction that a similar effort is being mounted by the Eastern bloc of capitalists to ensure that their interests prevail where their money is invested. The fact that “aid” from such quarters is similarly tainted is briefly mentioned in this book. However a credible account of the details of this would have to be written and published from that side of the capitalist fence and the dictatorships there are still too powerful to permit this.
A number of interesting examples are given to illustrate these themes, particularly in the second half of the book. It is a great pity, though, that with such a wealth of information at their fingertips, all basically confirming the socialist analysis of the capitalist system, the authors have not developed more political awareness. The left-wing moonshine they put forward has been exposed on many occasions. This is why we emphasise that this work should be treated as a source of information and not as a fount of political wisdom.
E. C. Edge