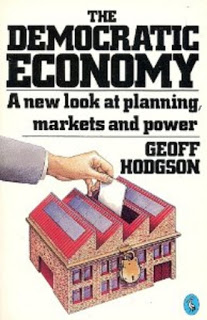 The Democratic Economy by Geoff Hodgson. Penguin 1984. £3.50.
It is not unusual to find that non-socialists writing on political and economic questions have interesting criticisms to make of other defenders of capitalism, but are far less impressive when setting forth their own ideas. This is the case with Hodgson.
His book begins by discussing the views of the “New Right”, by which is meant Hayek, Friedman and their followers in the Thatcher government. Their attitude is that freedom is the absence of coercion and that a free market economy minimises coercion by providing freedom of choice. It is not difficult to point to absurdities in this; poverty and starvation are coercive, so workers have no freedom of choice about entering employment. The state is not the only instrument of authority and coercion: the capitalist enterprise is another. Moreover, some degree of state intervention in the economy is a necessary feature of capitalism; laissez-faire capitalism in Britain was in fact the product of deliberate state action. The goal of the New Right — a system completely regulated by the market and private enterprise — is unrealisable (and, socialists add, equally undesirable).
On the basis of this conclusion, Hodgson proposes what he called the impurity principle, which states that different economic structures must necessarily co-exist in a single society (though one structure may be dominant). Pure market capitalism with no state intervention is thus impossible. Eastern European countries show central planning co-existing with some market forces. It follows from this that “some form of structural economic pluralism” is inevitable: it needs to be decided whether markets or planning will be dominant.
And here we reach the limits of Hodgson’s vision. Though he mentions in passing that socialists have often advocated the abolition of money, he has no conception of anything as revolutionary as abolition of the wages system. He wants a society based on worker participation, democracy and decentralisation, where markets still exist but are subservient to planning. This is not socialism with some elements of capitalist structure — it is capitalism period! It is not possible for socialism (a classless society based on common ownership and free access) to co-exist with capitalism (a system based on class monopoly and commodity production).
At bottom, Hodgson simply fails to understand what constitutes capitalism. He criticises Tony Benn for identifying markets with capitalism, but for the wrong reasons: he believes that markets can exist in socialism, not that capitalism can exist without a free market. His dismissal of the view that Russia is state capitalist is utterly confused, and leads him to conclude:

The theory thus transforms Marxism into a millenarian hope in an impossible scenario of simultaneous world revolution. In the meantime, ‘capitalism’ is everywhere.

In spite of himself, Hodgson has seen the implications of the socialist case. But he rejects it with the ignorant voice of reformism. Still, what should one expect from an advisor to Neil Kinnock?
Paul Bennett