as “primitive superstitions” for, though that may apply to some religions, and even to some Christian denominations, the basic message of Christ in relation to our fellow humans was “love your neighbour as yourself”. You may say, “What about the Old Testament?”, but a lot of what is said there was “updated” by Christ and the whole Christian code in relation to others summed up in the above-mentioned quotation. The early Christians lived in a community where “they would sell their property and possessions and distribute the money among all, according to what each one needed” (Acts 2).

The meaningless ritual and the hierarchical structure which some churches indulge in is, I suppose, what you Editors object to and. as a Christian, I object to it myself; but those are merely the trappings of religion, the peripheral details. The basic message, the real living truth, is to forget oneself for the common good of all — obviously to love God with all one’s might, but that is not the issue at stake here — and that is all that really matters. There is no place for selfishness, or greed, or indeed any desire for personal gain at the expense of others, in Christianity, and neither is there in socialism.

The early Christians formed a socialist society which worked perfectly when everyone cooperated, until it grew too large. The links between socialism and Christianity are too strong for you Editors to brush them aside — or are your theories so firmly entrenched that you will not back down? If that is the case, you are hypocritical and therefore no better than any other political party and I will not join you

Yours in anticipation of a considered reply to a carefully considered comment.

The first point in your letter accuses us of being entirely misinformed regarding the origin and evolution of religious beliefs. But you surely cannot be unaware of the mass of anthropological and historical evidence which informs us quite unequivocally that all religions, including Christianity, evolved from and are founded on nothing more substantial than primitive superstitions. Whatever personal experiences or inner visions you and others may have had, however revered the words of the priests and prophets as handed down to us. when closely examined they never amount to very much.

“Gods” are literally inconceivable, literally indescribable, literally indefinable. There are no steps you could take or investigative action you could engage in to bring these fantasies into focus or into a semblance of reality other than by an irrational abandonment of all normal verification procedures. Hence you are left with merely a belief, a faith handed down to you by people less knowledgeable, less informed than yourself and whose motives and intentions are totally irrelevant to your life. And one must always bear in mind that those who claimed the authority to vouch for “Divine Revelations” are the very same people whose over-heated imaginations and demented devotions gave birth to the “revelations” in the first place. What an abject denial of the dignity of intellect and reason it is to respond, in the face of all this, with the cry “. . . leave me alone — I’m content in my ignorance and feel safer being told what to believe than thinking for myself”.

“The basic message of Christ” to which you refer was an exhortation to believe in a meaningless (even though up-dated and humanised) God and not the commendable, well meant homilies you quote. The very core of Christianity lies in the former and you cannot escape the consequences of that by emphasising the latter. We cannot tell from your letter how much of Christianity, as traditionally understood, you have already discarded: does your unloading extend to the mysticism, the “miracles”. the claims made by the founder and the so called supernatural events attending his birth, death and after? If so, then you’re in the dubious company of other retractors who, mindful of the absurdities of fundamentalists, attempt to renounce the 90 per cent they find unacceptable and take on board merely the 10 they find congenial. But as the whole edifice is of a piece and you are not in a position to pick and choose, you take the lot or you leave the lot; logically you have no other choice. You, it seems, wish to pick the nice but ineffectual ethics.

The links between socialists and some Christians, to which you refer, have always been tenuous although they were forged in the heat of common hopes, desires, and expectations of a better life and an end to inequality. hunger, suffering, fear and all the other avoidable afflictions and indignities both are subject to. But socialism is one thing and Christianity quite another. The early Christians could not have had any comprehension of socialism as understood in this and the last century; it serves no useful purpose and only confuses matters when attempts are made to dilute the one and up-grade the other.

Above all, socialists work to lift the burden of ignorance and in this endeavour we must be implacably opposed to all religions because all require “. . .  the blessed state of innocent, undoubting, unquestioning faith. . .”; whereas, in our view, social progress can only be achieved by the very opposite intellectual stance. Behind the many bastions defending capitalism and obstructing progress towards socialism lurk authoritarian theologians who peddle anti-democratic attitudes, who belittle the strengths and self-developed abilities of “mere mortals” and. in condemning us all as “weak vessels”, seek to undermine workers’ confidence. Their doctrinal claptrap has always been an obstacle to progress and the advancement of science.

Regrettably, your concept of Christianity is a minority view. You say that it is “. . . to forget oneself for the common good of all . . . There is no place for selfishness or greed or . . . desire for personal gain at the expense of others . . .” You claim that this is the true Christianity, but throughout its history, from the first parables to the recent blessing by the Chief British Christian of troops on their way to kill (Christian) Argentinians, it has upheld the domination by a minority ruling class over the majority subject class; it has reinforced and defended the political and legal powers of that dominant class at the expense of the majority; it has always sought, through charity and by extolling the virtues of suffering, to excuse poverty and thus ensure its continuation; its holy writ calls on the poor and downtrodden to abjure protest and political action and to “Render unto Caesar that which is Caesar’s”. It has served and still serves as an apologist for every and any cruel autocrat, tyrannical despotic regime, every exploiter and ravager since the Romans realised it was tailor-made as the best unifying, pacifying and thus the best controlling agent they could hope to find.

The world would undoubtedly be better, pleasanter, more tolerable, less stressful. if everyone abided by the tenets you outline. But this wouldn’t touch the basic problems or their causes. How could it be otherwise when the nature of world capitalism requires of us and inculcates entirely opposite attitudes and behaviour. This system, which we seek to replace, dominates all aspects of life including the toleration or active promotion of religions, so long as they serve a useful purpose. Modifications, twists and turn-abouts are fairly easy to engineer as and when required: in the hands of skilled manipulators employed by the ruling class and its agents in the bureaucracy and religious hierarchies, the believer is a pushover. Witness the case with which workers are hyped up on the heady cocktail of religion, patriotic jingoism, nationalism and monarchy (or its equivalent). The intention is patently obvious: to ensure that the populace identify their own needs and aspirations with those of their class enemies.

You want to see a change in people’s behaviour and attitudes. Good, so do we. But behaviour and attitudes spring from social and economic structures not from the condition of the “soul”: relationships and roles are geared to the particular way the production and distribution of goods and services in any given society arc organised — to the particular requirements of those who possess the means of production and, of course, the right to cease production if it suits, never mind about needs or moralities. Socialism, on the other hand, would be conducive to the kind of harmonious cooperation you envisage. Satisfaction of one’s own needs would not have to be at someone else’s expense; and the results of common effort, ingenuity and inventiveness would be commonly owned and freely available, not privately owned and only available if profitable. 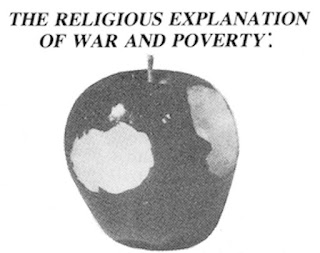 There cannot be any receivers, responses or answers “up there”, only an infinite succession of question marks. You may ask. “. . . but in that case, what is it all for; how did it all start; where did it all come from; what is the (its) purpose; where is it all going; where will it all end; what are we all doing here?” To these and similar questions there is only one possible answer: of all the past and present explanations, answers and accounts proffered, the least tenable, the weakest case, the proposition which accords with the fewest known facts, the claim which is the hardest to swallow, the assertion which requires the highest suspension of all reason and rationality for the longest period, the theory riddled with the most holes, stitched together with the greatest number of non-sequiturs and perverse presumptive leaps, is the one which invokes an “Almighty Personage” or “Being’’

You need not remain wrapped in the suffocating, mouldering bunting and handouts left over from a 2,000 year old Billy Graham Crusade, however acceptable some of that philosophy of “social concern and personal responsibility” may still be. Christians do not have exclusive claims to such a philosophy. We also seek to change hearts and minds — not by force or convoluted mysticism but by the only practical method open to the human race: self-help.