The Guardian is famous for its misprints, some of which are hilarious, but a 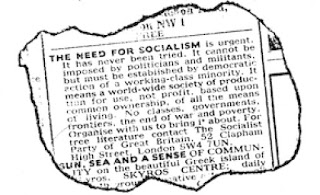 mistake which has recently recurred in our regular announcement in the paper’s small ads columns is by no means funny.
The socialist case is, and always has been, that socialism can come about only through democratic action by a working class majority, throughout the world, but for some reason the Guardian’s misprint operative keeps inserting the word “minority” for “majority”, regardless of the fact that to talk about democratic action by a minority is nonsense. More importantly, it is directly opposite to our case and to what we are trying to say in the ad.
We apologise for their mistake. We hope no worker has been put off by it. We also hope that no worker has read it and come to the conclusion that the SPGB is just another bunch of crazy, undemocratic elitists. The socialist revolution will be a majority, democratic act—the first social revolution in human history in the interests of the majority.