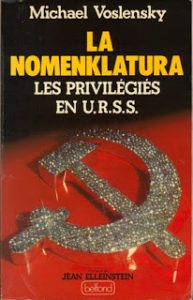 La Nomenklatura by Michael Voslensky (Belfond, Paris)
This book, written in German by a dissident who left Russia in 1972 and here translated into French, will also no doubt sooner or later appear in English but meanwhile we can already mention some of the information it gives on the privileges of the Russian ruling class.
Russia is a state capitalist country where the means of production belong to the state which in turn is dictatorially controlled by the single political party allowed to exist. The means of production are thus effectively monopolised by the top layers of the party, who constitute the owning, exploiting class. They are in fact a capitalist class, even though their ownership is collective rather than individual (as was for instance that of the hierarchy of the Catholic Church in the Middle Ages). Similarly, the proceeds of their exploitation of the Russian working class are shared out as bloated “salaries” and various institutionalised privileges and benefits in kind rather than as dividends.
Although Voslensky does not use the term “state capitalism” he shows that Russia is a class society in which the workers and peasants are exploited by a ruling, owning class as the “nomenklatura”, a social group who occupy the posts which the Party, at various levels has the sole right to fill. It is a clearly defined group—a special document proves membership—and Voslensky estimates their number at 750,000 (with their families, 3 million) or 1.5 per cent of the population, a tiny minority like the capitalist class in the West.
The official average monthly wage in Russia is 167 roubles. The basic pay of a head of sector at the Central Committee of the Party is 450 roubles, but this does not take into account that he is paid a 13th month, receives a cure bonus and tickets called kremliovka which entitle him to obtain good quality food cheaply. According to Voslensky, these extra perks bring his monthly income up to 750 roubles.
Then there are the various privileges in kind. A member of the nomenklatura lives in a luxury flat and has at his disposal a chauffeur-driven car, a dacha in the country and rest and holiday homes in the mountains and at the seaside. He also has access to special shops and restaurants where only the best is on sale, at cheap prices. Every station and airport has a special waiting room reserved for members of the nomenklatura only. Since the death of Stalin, membership of the group is virtually for life; even if you make some mistake you are not expelled from its ranks, but only transferred to a less important post—and so you still keep the privileges. Similarly, and even official Russian sociological studies show this, the nomenklatura is tending to become hereditary: new members increasingly choose fathers who are also nomenklaturists. Voslensky says that the nomenklatura could be said to live in a separate country which he calls “Nomenklaturia”:

And these privileged exploiters hypocritically proclaim that classes have been abolished in Russia and that social equality reigns there! But the Russian people are not completely taken in, as shown by the following widely-circulating Russian joke which Voslensky quotes—Question: what is the difference between capitalism and communism? Answer: capitalism is based on the exploitation of man by man. Communism is the opposite.
Adam Buick