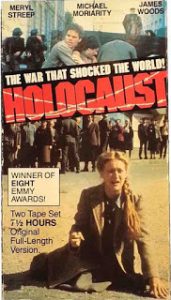 The word ‘Holocaust’, on many lips since the BBC’s screening of a sick, sickly and sickening soap opera of that name, means literally a sacrifice in which the whole victim is burnt, but has come to mean the mass destruction of life.
In common use, it refers to many events in history and several in the last hundred years—such as the genocide of the Australians and Tasmanians, of the North and South American natives (the latter is still in progress); the First World War; the slaughter of Russians under Stalin; the bombing of Dresden, of Hiroshima, Nagasaki and Vietnam but has become attached to the killing and cremation of millions of European Jews by the Nazis.
This appalling event was given the Peyton Place treatment by the NBC Production. A romantic drama straight out of Woman’s Own took place against a background of concentration camps, gas chambers and torture but the victims, after several years of this, were unmarked, well-dressed, clean shaven, with smart uniforms and hairstyles, not a bruise or a louse to be seen. Such sanitised violence is in a longstanding Hollywood tradition. The Cops and Robbers trash shoved down our faces night after night also portrays fighting without wounds (a man is knocked out with a bottle, gets up. shakes his head, unscathed; a big shoot-out ends with a joke at a celebration party).
Holocaust was guilty of sentimentalising savagery in this way. The idea that violence is ok if done by ‘our side’ was put across; for example, by the unsubtle Zionist propaganda at the end — the football playing hero was given charge of a group of boys to mould them into the right material to raise hell in Palestine.
The motive behind making the film was clear; the proceeds are not expected to go to the still suffering survivors, or to the refugees of Palestine and Lebanon. It was a cynical exploitation of human suffering for gain but its one effect has been to revive memories of the Second World War.
That war and other atrocious crimes against humanity should never be allowed to fade from memory as evidence of what happens under capitalism. There are those who say that these wars and massacres are distant history; that it is time to forgive and forget: that those organisations — the political parties, power blocs, capitalist gangs—who encouraged the slaughter and who are still in power, should not be blamed for what happened a long time ago.
They encourage short memories in the working class. They support a system in which an individual who steals an apple has it on his record for years, but the instigators of the killing, maiming and starvation of tens of millions have their slate wiped clean. Such is the “justice” of capitalism.
The Germans and Japanese, once fiends to be destroyed, are now portrayed as hardworking, honest folk the Briton should emulate in their eager production of surplus value. Tommy, the Salt of the Earth, has now become lazy scum again (until the next time). The corollary of this rehabilitation of the Germans—the guilt of the Allies— is played down however.
There was a Nazi slush fund for the Chamberlain faction of the Tory Party, while Churchill was being oiled by the Czechs. Sections of the capitalist mass media tried to suppress knowledge of Nazi atrocities until they became useful for propaganda. The ‘Victims of Yalta’ were forcibly sent to death and slave camps: Eastern Europe and the Balkans were carved into portions of “influence” by the victorious Allies; and the Poles and Czechs, whose ‘freedom’ was the pretext of the war, were allotted to the Russians.
One of the lies put out by Holocaust was that Nazism was opposed to capitalism. That was what the National Socialists said. The National Front use the same lies today. In fact, Fascism was just another way of running capitalism. It can be brought in if the working class can be hoodwinked into surrendering democratic principles.
The emaciated people, the prisoners, the torture, the war, the waste, the arrogance and wanton extravagance of the privileged class are still a reality, not a celluloid nightmare and will remain so until the workers awake from the trance in which they are bound. For what is it but a trance, induced by the capitalist mind-benders, which disposes them to have pins stuck in them, to part with their time and energy, to have their lifeblood drained, the flesh stripped from their bodies, to be burned alive, to be sacrificed on the altar of Capital, to succumb to successive holocausts, when they are numbered by the hundred million and are the producers of everything of use on the earth?
F.W.S.