Book Review: Tussy in her time 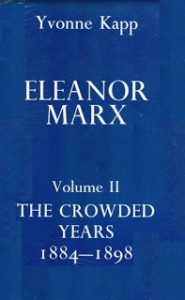 Eleanor Marx. Vol. 2: The Crowded Years, 1884-1898 by Yvonne Kapp. Lawrence & Wishart, £12.00.
We are bound to be interested in Eleanor Marx. She helped her father and Engels; she translated some of Marx’s work; she spoke in the streets, took part in agitations, was in William Morris’s Socialist League and the SDF from which the Socialist Party of Great Britain sprang.
The first volume of Yvonne Kapp’s biography, published in 1972, reconstructed the life cf the Marx family and Eleanor’s until she went to live with Edward Aveling, and was stunning. This one is twice as big, even more assiduously detailed, and not quite as good. In particular, there is an overweight middle section. Aiming to give a comprehensive account of Eleanor’s political and trade-union activities, Mrs Kapp explains why she was speaking at Stratford or Beckton or Clapham Common; this produces lengthy accounts of the gas-workers’, dockers’ and match- girls’ wages and conditions, and the unrest of the time; and in turn, the feeling that much of it can be and has been read elsewhere.
The people in the story come alive. As in the first volume, Engels — “the General” — emerges as a superb character. He is not only scholarly, industrious, far-seeing and generous, which we knew, but immensely lovable and put-upon by females. Of Morris, Mrs. Kapp says his stature was so great that a biographer of his associates wants to echo Alice in Wonderland : “All persons mere than a mile high to leave the court.” The writer does not conceal her likes and dislikes. She finds H. M. Hyndman and several of the other well-to-do radicals of the time to have been detestable, and has a poor opinion of Eleanor’s sister Laura and her husband Paul Lafargue. As the translator of the Engels-Lafargue correspondence twenty years ago she revealed the astonishing extent to which Lafargue sponged on “the General”; here she suggests plainly that he was politically inept too.
Mrs. Kapp argues against the established picture of Aveling as a dishonest adventurer who lived above his means and caused — even arranged, in some versions — Eleanor’s suicide. She successfully shows that Hyndman and some of his colleagues did all they could to promote the picture, and questions the evidence on various incidents. At the same time she acknowledges that hardly anyone liked Aveling; she presents him as weak and lacking sophistication in some ways, though a masterly public speaker. In fact some of the founders of the Socialist Party of Great Britain had attended Aveling’s economic classes while in the SDF. According to our late comrade Gilbert McClatchie they described him as a first-class tutor and a “bad hat” in his private life; whether the latter was first-hand knowledge or SDF reputation is not known.
The book is a mine of sidelights and quotations. It accounts of the wheeling and conniving in the SDF and the short unhappy life of the Socialist League are vivid, and the writer is sharply aware of what happened when the labour leaders Eleanor helped to raise took over: “She could not foretell that the word ‘socialism’, still a beacon to millions of working men and women, would — unlike that ‘spectre haunting Europe’ — be misappropriated to make capitalism more viable, for which service feudal honours, lordships and knighthoods, would be conferred upon the low-born; nor that ‘Marxism’ would become one of the most popular parlour games to be played at universities . . .” Mrs. Kapp conveys to the reader her sympathy with the old watchwords “educate, agitate, organize” — perhaps with too much emphasis on “agitate”, as if despite her own lesson. But her two volumes together are a fine piece of work. It is not the fault of author or publisher that the price of this volume is going to confine ownership of it largely to those university parlours until or unless there is a cheaper reprint; can that be hoped for?
Robert Barltrop