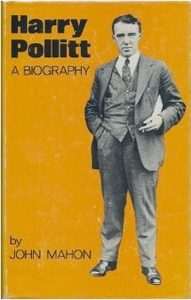 Reading Johnny Mahon’s fairy story, one wonders why anyone else ever bothered. A little bloke from Manchester called Pollitt did it all. You name it, he did it. Who stopped munitions going to Russia? Who organized the strikes in the ‘twenties? Who rallied the dockers, boilermakers, policemen, tailors and busmen? Who initiated the hunger marches? That’s right. Who organized the Minority Movement? Oh, blimey. Who put the Communist Party back in its feet in 1923 and 1929? Who inspired the British battalion of the International Brigade? Who instigated the Second Front and put Britain on the right road to Socialism? Our Harry.
No wonder he said himself, after twenty years of this lark, that he was exhausted. he even ran the Committee for Work among the women for a while. What a man! The sheer strain of trying to keep up with Stalin’s manoeuvres was enough to upset anybody. And (as is well known) poor old Harry was not too good at reading the signs of the times: even with Svengali Dutt behind him. In fact, Dutt was even poorer at it. This phoney guru, with his fake Eastern Mystic act, was worse that his pupil—predicting the collapse of capitalism for six months in 1930.
Pollitt made the ghastly mistake of jumping to the conclusion that Stalin would oppose Hitler in 1939, when it was obvious that he would unite with anybody to save his own skin. Mahon says they “were surprised” when they heard of the Stalin-Hitler pact. Springhall came back from Moscow with Stalin’s orders: “it was an Imperialist war—nothing to do with the workers.” In three days the Central Committee of the CP turned a complete somersault — opposed the war, and sacked Pollitt. And who was the louse who effected his dismissal? His own great mentor, R. Palme Dutt.
Packed off to Manchester in disgrace, he replied, when somebody said the office was cold: “It’s my Siberia.” But give the devil his due. Nine months later, Hitler did invade Russia, and the Imperialist war became “a war of liberation” and “an anti-fascist war” overnight. This could have been Harry’s moment of truth. His critics confounded, he could have proclaimed “I told you so”—if he hadn’t already made the most crawling capitulation, writing to the Central Committee that he would loyally carry out their instructions “to the letter”.
Actually Pollitt was by no means the best orator in the CP. He was a maudlin sentimentalist, a hysterical crowd-puller, playing on the emotions. As one who listened to dozens of his efforts, this writer never detected penetrating erudition or studious application. His orations were of immediate, usually trivial import—”the day-to-day issues”. The lengthy list of pamphlets, books and articles attributed to him were frequently written by others (including Mahon himself); certainly by Dutt, or Petrovsky the Comintern agent shot in Russia.
The story of his life is typical of dozens of bright young working men at the turn of the century. The workers were becoming articulate. Tom Mann, John Burns, Ben Tillett and scores of others emerged. Pollitt was the secretary if the Openshaw Socialist Society and wrote the first election leaflet it published. It disaffiliated from the Labour Party and the Trades Council and ran a radical campaign attacking reforms as a capitalist trick.

The word Socialism implies a complete revolution in the internal workings of the Capitalist system. Social Reform proposes nothing of the kind  . . . Reforms serve two important purposes. (1) They keep the worker in a better working condition. (2) They bolster and patch up the evils of Capitalism,

This was written by Pollitt in 1910, and according to Mahon he learned it from Moses Baritz (page 28). How was it that Pollitt could finish up going to see Lloyd George to ask him to help inspire the Second Front, and standing on Tory platforms supporting Tory candidates? It is obvious that even in the ‘twenties he had become a job-hunter, applying to the ILP in West Ham for a paid organizer’s job. His first position was as full-time organizer of the “Hands off Russia” campaign. Any real biography would have shown him to be a slick and wily operator, seizing control of the “Industrial Dept” in 1923 and the Executive in 1929.
Mahon has written 500 pages about Pollitt without even mentioning his disastrous order to break up other parties’ meetings (Daily Worker, 1932). His book calmly quotes Pollitt’s complete renunciation of his life’s work (the violent overthrow of capitalism by “heavy civil war”) in oily phrases about “peaceful take-over”, “Only by the majority”, “re-adjusting the State” (not smashing it)—denying everything Lenin advocated. This, Mahon says, is Harry’s great contribution to the debate on “the British Road to Socialism”. He should have gone into advertizing!
Right up to 1952 Pollitt was in Moscow eulogizing Stalin. But in 1957, after Stalin’s death and exposure, Mahon says, Pollitt “didn’t know” of the systematic extermination of the entire Bolshevik Old Guard. He “didn’t know” of the assassination of Bukharin, Ryansanov, or the Losovsky he professed to admire so much. This is like the people in Germany who “didn’t know” there were ant concentration camps.
At a comparatively early age (66) Pollitt had burned himself out. All to be “the leader”. Was it worth it? Certainly not for the working class.
Horatio