Book Review: The Truth About Freedom 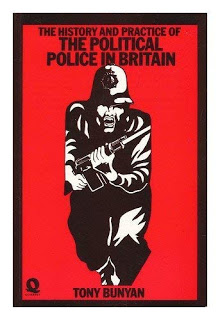 We recommend this book to all those starry-eyed people who blissfully go round believing in the myth of “British freedom”. Tony Bunyan has done his homework very well, his book is crammed with detailed and relevant information. Most of the sinister and ugly features usually associated with tyranny and dictatorship, have their counterpart in what to the popular mind is a free country. Just as in dictatorships, a servile press helps to fashion a climate of opinion. To be accused is to be deemed guilty. Particularly in matters concerning “security”, the attitude is we cannot be squeamish about condemning a few conspirators; the national interest must come first. If, after many months in prison, charges are dropped or the case fails for want of evidence, then the “free” press can be relied upon to make capital out of those cases resulting in convictions and ignore the rest.

The sheer number of distinct police agencies carrying out a vast range of surveillance, infiltration, spying and oppressive activities, is bewildering. Apart from the “ordinary” uniformed police force (which is itself supplemented by Special Constables through Acts of Parliament going back to 1831) there are D15 and D16, the former dealing with foreign espionage and “subversion” inside Britain, the latter with external spying. Then there are the Special Patrol Groups. These are specialist riot police who go round in unmarked cars and carry arms as a matter of course and are trained in the use of CS gas. They were set up in 1965 and are not to be confused with the Special Branch, which goes back to 1883 and played its part in combatting an outbreak of Irish bomb attacks during that period.

From the beginning the Home Office had a direct concern in the “political intelligence” activities of Special Branch. Spies were planted in groups of minority activists such as the Legitimation League. In the early years, superintendents appointed under the Factory Act of 1833 were used to spy and report on workers’ activities.
The Official Secrets Act of 1889 dealt with spying and breaches of official trust by state employees. The 1911 amendment extended powers to act against journalists and newspapers for receiving and publishing information. Further strengthening Acts were passed in 1920 and 1939. Brendan Mulholland of the Daily Mail and Reginald Foster of the Daily Sketch were sent to prison in 1962 for failing to reveal sources of information. The phrasing of this legislation is very loose, lending itself to wide interpretation. The ruling class, through the government of the day, has a formidable array of oppressive powers at its disposal.
Books can be barred from publication or “doctored” to suit the Ministry of Defence, to which all ex-military personnel are required to submit their manuscripts. Examples are Sir Compton Mackenzie’s book Gallipoli Memories (1929) and a book by Anthony Nutting (a former Privy Councillor) on the Suez Crisis of 1956.
The Franks Committee, set up in 1971 by the Tory Government to look into Section 2 of the Official Secrets Act, produced a report running to four volumes. Neither the Tories or the following Labour government took any action. The issue arose out of the use of D-notices against the Daily Express and the Sunday Telegraph. Three people were sent for trial at the Old Bailey over an article dealing with Biafra. The Public Records Act enables governments to suppress information for up to one hundred years.
Our “heritage of freedom” or rather the privileged position of the capitalist class, is further safeguarded by laws like the Statute of Treasons, dating back to 1351, and the Riot Act of 1381 (year of the Wat Tyler rebellion). The Tolpuddle Martyrs were condemned under the Unlawful Oaths Act of 1797.
The Incitement to Disaffection Act of 1934 is aimed against the circulation of “seditious” literature to members of the armed forces. They must be trained to kill, not taught to think. Under this Act a man was sent to prison for two years in 1972 for possessing literature likely to cause disaffection, namely a pamphlet concerning the war in Northern Ireland.
Bunyan produces an illuminating résumé of the Angry Brigade trials. Of the twelve people arrested and charged, two had charges against them withdrawn, five were acquitted on all counts, and five were convicted on conspiracy charges. Prescott was sentenced to fifteen years in prison; Purdie was found not guilty after having spent nine months in jail. The press in general and the Evening Standard in particular applauded the sentence and ignored the acquittal. The conduct of the police in gathering evidence and making arrests, was somewhat devious. Purdie was arrested “for questioning, which is illegal. He was not cautioned nor was any warrant made out for his arrest”.
The police have powers to seriously restrict press coverage of trials. The Metropolitan and City Police Press Card is the means by which the number of reporters has been reduced from eight thousand to a trusted two thousand whose names and credentials are registered. Sir Robert Mark, promoted to power by Roy Jenkins and Reginald Maudling, is behind this censorship by the backdoor. According to Bunyan, Commissioner Mark is contemptuous of the legal processes he is supposed to uphold: trial by jury in particular. No doubt for him the ideal situation would be one where the police also acted as judge, jury and jailer.
Further specialized units are the National Drugs Intelligence Unit and the National Immigration Unit. All streams meet at and have common access to the Police National Computer Unit at Hendon. It is estimated that by 1979 more than 36,000,000 names and a variety of other details will be almost instantly available.
The staggering edifice of repressive legislation has been steadily built up over more than a hundred and fifty years. Particular emergencies, such as two world wars and outbreaks of social disturbance, have prompted a reactionary and obsolete ruling class to try to strengthen their hand to preserve a little longer their parasitic position as a privileged owning class. Organizations like the Angry Brigade and the IRA help to create an atmosphere of fear, which provides the ruling class with their excuse to act in the name of security. The backlash of increased repression effects everybody.
In recommending Tony Bunyan’s book as a useful source of information on an important subject, we do not share his conclusion. He denies that the elected government controls the institutions of the state and is vague about how capitalism can be ended.
However ugly and menacing the coercive machinery may be, it will not avail against the rising tide of working-class understanding of and desire to establish Socialism. In fact, the whole set-up can only operate against a background of working-class acquiescence. The most useful lesson to be learned, is, that the vote is all-powerful. The state cannot be smashed. It can and must be captured by a conscious working class, in their quest for freedom.
Harry Baldwin