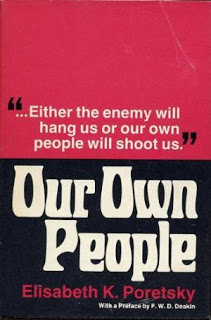 Our Own People, by Elisabeth Poretsky OUP 42s.

This is not a book for the squeamish, it is not only more horrific than a Bond thriller; it bears the stamp of truth.

The author is the widow of one of a group of six young men from the same small town (often referred to but never named) in Poland who were fired with what they thought were communist ideals and became professionally attached to the Soviet Communist Party, mainly as members of the secret police, the dreaded NKVD. The story traces their history over a period of some twenty years between the wars till all six of these comrades had been duly liquidated. The title is taken from a remark made by one of the six that they would either be hanged by the enemy or “our own people” would shoot them. In fact all except one were murdered by their own NKVD which they had served so faithfully. The exception hanged himself.

The book teaches yet again the fatal trap of expecting that an elite of intellectuals and professional revolutionaries can lead the working class (who are not socialists) into Socialism. It led them instead into a murderous dictatorship which killed millions of ordinary people, as well as innumerable dedicated Bolsheviks. And which still maintains its grip on the Russian workers. But perhaps the most tragic aspect of the book, perhaps even worse than the nightmare atmosphere of Moscow at the height of the Stalinist purges, is that the dreadful lesson was, even at the bitter end, not learned by the highly intellectual victims whose fates are here described. The author’s husband, who finally broke with the regime when he could no longer tolerate its sheer horror, wrote in a resignation letter to the Communist Party that he intended to devote the rest of his life to the cause of Lenin and of Trotsky’s Fourth International. With sublime indifference to the fact that it was precisely they who had laid the murderous foundation on which Stalin was to’ build. In practice the rest of his life was a mere few days before the NKVD murdered the letter writer in Switzerland. Once an agent’s number was up, he merely had the choice of obeying the summons to return to Moscow to be killed there, or to refuse and be killed in the country where he was on assignment. And the author describes how the murderers in the latter case were usually emigre Tsarist officers who obtained both pay and pleasure out of killing communists.

Nothing in the book indicates that the six friends realised that the Russian masses were the victims of spurious communism even more than the NKVD men who waited paralysed with fear for their apparatus to liquidate them. Nothing in the writing, that is. But there is one photograph which speaks volumes. It shows a fat and well-dressed Russian bureaucrat addressing a factory meeting calling for a vote of thanks to Stalin for butchering his opponents (and even Stalinists). One does not need to be specially sensitive to have nightmares from looking at the terrified faces of the thin and ragged workers as, without the slightest sign of enthusiasm, they dutifully raise their arms to condemn Radek, Zinoviev and the rest.

The question of why all these people confessed in the great trials is again raised and the pertinent point is made why Radek, for example, who had risen so high, should want to spy for fascist enemies. What possible motive could he have had? There is no doubt from this book, any more than from Khruschev’s “secret speech” twenty years later, that fear of torture for themselves and their families was reason enough. The columns of the Socialist Standard in those days were just as prescient on this issue as they were in 1917 when they stated that the revolution could not produce Socialism because neither objective conditions nor the minds of the workers (still less of the peasants) were ready. Yet on the confessions the position of such as Koestler was that the old Bolsheviks all confessed to save their revolution. Despite the fact that the arch-victim, Trotsky, tried in absentia in all the trials, never dreamt of confessing to the preposterous crimes they were charged with. (On the contrary, he did not even confess to the real crimes which he and Lenin committed such as the massacre of the sailors at Kronstadt.) The difference being, of course, that he was out of reach of the NKVD torturers.

The photograph referred to above contrasts vividly with the pictures of well-fed and well-dressed Soviet families which were to be found at the same time in the pro-Russia press of the West. This book shows how these pictures were faked by the minions of Willi Münzenberg, well-known before the war as the “communist millionaire”. The book tells us what happened to him. He eventually quarreled with Stalin and was found hanging from a tree in France. Suicide, clearly. But French police found something odd. He had been strangled before being strung up. “Our own people” had struck again. We also read how other German communists were handed over by Stalin to Hitler to be murdered in Nazi concentration camps instead of Russian ones.

One could go on with these gruesome stories but the moral has been pointed often enough. Only an informed socialist working class can bring a socialist revolution. And only free democratic conditions can produce such enlightenment Leninist elitism can lead only to disaster.