New Pamphlet: Questions of the Day — A Socialist Analysis

The new revised edition of this basic Socialist pamphlet is now available. 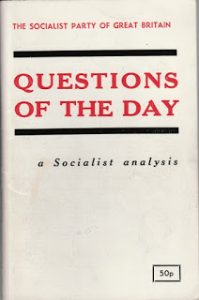 It explains how capitalism is the cause of the problems wage and salary workers face today and how only Socialism will provide the framework within which they can be solved for good. It points out how, in modern political conditions, the way to Socialism is through the democratic political action of a majority of convinced socialists using the ballot box and parliament to win political control. It exposes as futile the policy of trying to deal with social problems by means of reforms of capitalism and shows that nationalisation is merely state capitalism. The role and record of the Conservative, Liberal, Labour and so-called Communist parties are examined and all of them are seen to serve capitalist interests.
The last three chapters deal with a number of frequent objections to Socialism. Overpopulation is shown to be a myth, the real problem being the chronic underproduction caused by the restrictions of capitalism’s profit motive. The relatively backward countries present no barrier to the immediate establishment of Socialism throughout the world, the pamphlet explains, because the modern industrial system that now covers the world is quite capable of turning out an abundance of wealth for all the world’s population, wherever they live, to enjoy. And what about human nature? This too is answered by showing that the view that man is born lazy, greedy and aggressive is nonsense. Human behaviour depends on the society human beings live in and nothing anthropologists and other social scientists have found shows that human beings are incapable of co-operating on the basis of common ownership to produce an abundance of wealth from which they can take freely according to their needs.
Questions of the Day, since the publication of the first edition in 1932, has been the pamphlet which gives in handy form the policy of the Socialist Party of Great Britain on current political topics. Those who wish to know more about us are urged to get a copy. It is priced at 2s. (postage extra) and can be had from:
The Socialist Party of Great Britain, 52 Clapham High Street, London, S.W.4.