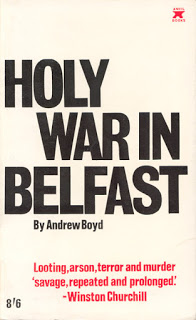 Belfast has a tradition of sectarian disturbances which is still alive as the fence the Army has put up between the Protestant and Catholic slums shows. Andrew Boyd gives here a simple blow-by-blow description of major riots that took place in 1857, 1864, 1872 and 1886. He has added a couple of hastily-written chapters which are supposed to bring the position up to date, but his book really ends in 1886.

That was the year Gladstone’s first Home Rule Bill was defeated. It was also the year the Orange Order became respectable. Up till then it was a secret society of poorer Protestants whose parades were nearly always accompanied by disturbances. Their aim seemed to be to provoke the Catholics whenever the occasion arose. As such they were regarded as a nuisance by the government and for many years Orange marches or the display of Orange banners were prohibited. Many of the clashes described by Boyd were between police and Protestants.

The pattern is familiar: raving Presbyterian ministers, gun-fights, mob violence, intimidation, barricades, murder, arson, looting and battles with the police. In nearly every case the aggressors were the Orange extremists. In every case it was the poor, Protestant and Catholic, who suffered the consequences of this violence in terms of death, injury, homelessness and unemployment.

Inflamed by the anti-popery of their preachers, the Protestant workers feared that Home Rule would mean domination by the Catholic majority in the rest of Ireland. The landlords and the rich capitalists knew this was so much nonsense but they had a very real economic interest in encouraging hostility to Home Rule. The landlords wished to protect their right to exploit and oppress the Irish peasants while the capitalists wanted access to the profitable markets of the British Empire. To protect their economic interests they decided, as Churchill’s father Lord Randolph Churchill put it, to play the Orange card. Catholic-baiting and anti-popery became the stock-in-trade of the Unionist Party which emerged in 1886 from the anti-Horne Rule elements in Ireland.

Since 1920 this Party has itself ironically enjoyed a measure of Home Rule over six counties in the North East of Ireland. Lord Craigavon, Northern Ireland’s first Prime Minister, declared that they now had a “Protestant government for a Protestant people”, a statement not calculated to encourage the “loyalty” of the non-Protestants who made up a third of its subjects. To deal with those who were likely to be “disloyal” the government soon passed the notorious Special Powers Act; set up a special para-military police force of which the equally notorious B Specials survive; abolished proportional representation in elections and gerrymandered local council wards—all really needlessly since the Unionists had a built- in majority if they could continue to play the Orange card successfully.

Today, however, this has become an embarrassment — with the need to attract overseas investors and with full free trade between Ireland and Britain (including Northern Ireland) due in 1975—and some Unionists are trying to repudiate their past. But this will not be easy since not only do many of their followers still hold to the bigotry their masters once taught them but the records show that what Paisley says today nearly every leading Unionist—Minister, MP, aristocrat, judge or churchman—said yesterday.

For the record (since the publishers do not disclose this) Boyd is a member of the Northern Ireland Labour Party and is obviously out to discredit the Orange Order and the Ulster Unionist Party. That’s easy, a great deal easier than defending the NILP, which is but a second unionist and loyalist party with an unrivalled record of opportunism including support for the Special Powers Act.