Book Review: The Pot and the Kettle 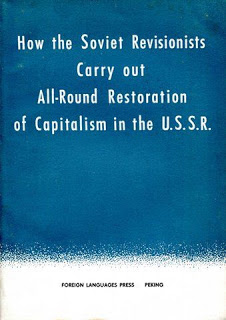 How the Soviet Revisionists Carry out All-Round Restoration of Capitalism in the USSR (Foreign Languages Press. Peking. 1968.)

The Chinese Communist Party’s current line on Russia is that soon after the death of Stalin in 19S3 there was a “bourgeois coup d’etat” in which political power was seized by a group led by Khrushchev who were pledged to “restore capitalism” in Russia. Since then, in their view, the policy of the Russian government has been aimed at consolidating the rule of the “bourgeois privileged stratum” that has arisen. What is needed now, the CCP goes on, is a “second revolution” to overthrow the government and bring Russia “back again on the road to socialism”.

Accusations of “capitalism” between Communist Party governments when they fall out are not new. In 1950 Yugoslavia called Russia “state capitalism” but dropped this when friendly relations were restored. Such accusations have been a criticism of the particular policies of a government rather than of the economic system within which it works. To go too deeply into economics could be dangerous since there is not much difference between the economic systems in Russia, China and Yugoslavia (it seems that already there is a group in China applying the CCP analysis of Russia to China). As we know, all of them are capitalist.

The CCP accusation of “restoration of capitalism” in Russia rests on two aspects of Russian economic policy. First the “new system” of gearing industrial production more directly to profit and, second, the encouragement of private enterprise in agriculture.

Russian industry has always produced for profit but in the past there was rigid central control. The new policy involves giving more independence to factory managers and allowing them to adjust output to profit and market demands. The CCP allege that this has led to the top managers abusing their new powers to line their own pockets so that the state enterprises “have been turned into capitalist undertakings owned by a bourgeois privileged stratum”. The managers pay themselves large salaries, award themselves huge bonuses, sell machinery, set up underground factories as a side-line, embezzle funds and so on:

The heads of many industrial enterprises, ‘state farms’ and commercial establishments have become new bourgeois elements who draw high pay, receive high bonuses, indulge in unlawful practices, grossly abuse their power, and exploit and oppress the working people. Managers of many industrial enterprises even sell for profit such means of production as machine-tools, hoists, generators, locomotives and seamless tubes which, of course, are all state property”. “Under the stipulations of the ‘new system’, a big share of the profit gained by enterprises is directly pocketed by a small handful of persons of the privileged stratum, such as directors and engineers, or used indirectly for their benefit”.

But there is nothing new about this. It went on too under the old system of centralised control (which the CCP mistakenly say was socialist) and has long been one of the ways in which one section of the Russian capitalist class has got its share of the unpaid labour of the working class.

This has happened in the countryside too, according to the CCP, where new “experts” have been put in charge of collective and state farms:

It is these persons who wield all the power in the rural basic-level economic organizations and by both ‘legal’ and illegal devices are expropriating a great part of the fruits of the peasants’ labour.

According to Soviet press reports, agricultural products from all the private plots of land in the USSR account for approximately half to two-thirds of the total products of the whole country. From the private sector potatoes, for instance, account for 63 per cent, fruits 54 per cent, meat 40 per cent and eggs 67 per cent.

We would add that while much of this trade will be in the hands of of ordinary peasants there must also be a growing number of private capitalists (merchants, market gardeners, hauliers, etc.) with money invested in this.

This kind of criticism is rich coming from China where, until recently at least, capitalists were still legally entitled to a fixed share in the profits of their old businesses.

Talk about the restoration of capitalism in Russia is nonsense since capitalism has never been abolished there. Ever since their rule was finally consolidated in 1921 the Russian government has tried to develop capitalism in Russia, both by using the state and by encouraging private enterprise. At different times the emphasis has changed, as it seems to be again. Lenin at least had the honesty to admit that this policy was state capitalism.