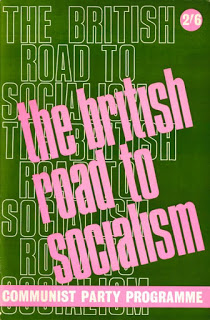 The Communist Party of Great Britain, like Tennyson’s immortal brook, seems to go on and on forever. Brooks, however, can normally be relied upon to follow a predetermined course with some consistency; this is outside the capabilities of the Communist Party. This can be assumed from the latest edition of The British Road to Socialism, a remarkable document in which the CP sets out to woo the workers with the glorious principles of Reform. Not that this is a new technique; the Communist Party has never advocated anything other than a few petty alterations to the existing social system, capitalism.

This pamphlet, however, does include one or two new features, or, more precisely, new details of old ideas.

It is not necessary here to record an endless list of “policies” along these lines; anyone willing to pay the Communist Party piper for the modest sum of two and sixpence can call any tune he could possibly wish for, ranging from the Balance of Payment Blues to the Social Security Symphony, and even the Technology Tango. No longer need any worker feel left out of the CP’s plans—every prejudice is catered for. Should you disagree with any of the “policies”, don’t despair; Communist Party promises change regularly.

Out of so much trash only one fact emerges which is relevant to Socialists and the interests of the workers, namely, that the “Communists” are no more concerned with Communism or Socialism than are the Labourites or Tories. They still see Communism and Socialism as being different systems, a throw-back to the days when the CP in Britain acted exclusively as a foreign agent to the Russian ruling class, and was obliged to echo well-known libertarians like Stalin, who excused the brutalities of the day with the “means to an end” argument. Page seventeen contains the disquieting intelligence that Russia is still a “Socialist State”; this means, probably, that the type of life “enjoyed” by workers there is an insight into lives of workers in Britain should the CP ever come to power.