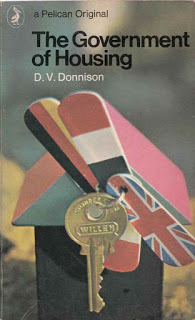 Housing, like everything else under capitalism, is a commodity. To get the shelter they must have to live, human beings are forced to pay for it. Naturally, the standard of housing they get depends on what they can pay—and what most can pay is, thanks to the wages system, restricted by the price they get from selling their mental and physical energies to an employer. So that under capitalism the housing standards of most people are restricted to what they need to keep themselves in working order. Or, rather, this is the ideal. In fact, it is never achieved and many workers have to live in conditions which even capitalism admits no human being should have to suffer. Professor Donnison, who was a member of the Milner Housing Committee, argues, in a recent Pelican book The Government of Housing, that such kinks in the housing market can be ironed out.
After examining the needs of households and how they vary through a person’s life (unmarried, married with children, after the children grow up, old age), he says that it should be possible to work out a housing policy which gives everybody the type of housing they “need”.
Building houses is a business and those with money invested in it expect to get the normal rate of profit. So it is no use working put a policy unless you can ensure that the houses can be sold. The housing problem, as Donnison sees it, is how to redistribute demand (“effective” demand, of course) for housing to those who need it so that the housing market can be sustained:

The difficulties of the richer countries arise not from an absolute shortage of personal income required to meet housing costs, but from an unequal distribution of incomes amongst households, and from a relationship between incomes and housing needs which is ill-matched, both in terms of income groups and in terms of the lifetime of individual households.

Donnison’s solution is to pay housing allowances “to enable poorer households to compete more effectively in the housing market”.
This is a classic case of a “redistribution of misery” a la Beveridge Report. The total (effective) demand of the working class for housing is not to be increased but is to be redistributed more efficiently so that people can buy what they need. Socialists have always denied that this was the problem. As far as the working class are concerned the problem is that they can’t afford the housing that human beings could—and therefore should—have. And we’re not talking about minimum utility buildings for workers, but about houses for human beings. This problem will last as long as housing is a commodity and as long as people’s “effective” demand is restricted by the wages system; that is; until capitalism is replaced by the common ownership and democratic control of the means of social life. Socialist society, where housing, like everything else, would be produced for use and where buying and selling would have gone, would only be faced with a technical and administrative problem here and not with a financial one. We wouldn’t want to underestimate the work of planning involved but some of the research techniques (population forecasting, land use surveys, town planning) favoured by Prof. Donnison could easily be adapted for use in the non-commercial society that Socialism would be.
The book is written for the “experts”, those concerned with working and carrying out housing programmes, but that’s no reason why the rest of us should not have a look at it, especially as there are some shrewd comments on past reforms in this field. Donnison is one of the few to see that the 1965 Rent Act (hailed as the repeal of the Tory Rent Act of 1957) “is in the longer run a measure for the raising rather than the lowering of rents”. In popular usage the word “slum” is used loosely, but for slum clearance a precise legal definition must be reached. One result is that ‘uncertainty about the present criteria discourages local authorities from condemning houses whose unfitness may be humanly speaking obvious, but legally speaking questionable”. In Britain the danger to health, as from damp or lack of air or water, has been the criterion for classifying buildings as slums. A slum, in law, is an insanitary house. Local authorities have a certain amount of choice as to how many houses they declare unfit (“Many authorities are reluctant to look beyond the number of slums they are administratively and financially capable of dealing with during the next few years”). So, clearly, the number of slums so-designated is no guide to the real number of unfit houses. But more, some houses are bad from other than health reasons, as from overcrowding or mismanagement. A recent Act does allow councils to deal with such cases but still, as Donnison says:

If the replacement programme is to be greatly enlarged, an increasing number of authorities will find that they have cleared all the houses that could properly be described as ‘unfit’ yet they will not have eliminated bad housing conditions.

An interesting confirmation of the Socialist argument that one reform leads to another problem is over rent control and the rates. Rent control was supposed to make the poor better off (in fact, at best, it just stops them becoming worse off). However, instead of paying high rents many had to pay high rates:

In this country rent controls have permitted the rates levied on poorer households to increase to levels that would otherwise have been politically intolerable. Thus a large share of the revenue of which landlords were deprived as a result of rent control coupled with inflation was not retained by tenants but diverted to local authorities.

The recent rate relief reform was brought in to solve this problem, created in part by the rent control reform. Who knows what new problems this new reform may cause?
Donnison is good on immigration, often canvassed as a cause of bad housing. In practice there is no difference between internal and international migration but in Britain there has been a net outflow of migrants since the war:

For a dozen years after the war there was a small net outflow of migrants from the United Kingdom; but between 1958 and 1960 this changed to a moderate inflow that rose steeply during the two years before the Commonwealth Immigrants Act was brought into force—an increase that may have been largely brought about by the impending Act itself. But by 1964 the net movements of migrants was again an outward one. Further restrictions imposed since then and the recent increase in emigration from Britain will ensure that this loss continues.

Socialists have always said that migrants are further victims of capitalism’s bad housing not its cause. Donnison, writing of London’s housing, confirms this:

Restriction of immigration from overseas will not have a major effect; the immigrants’ plight is the outcome not the cause of London’s housing difficulties, and if the inflow of immigrants is stopped their places will be taken by people from other parts of the country—or a number of essential jobs will remain unfilled.

There is no doubt that the Tory and Labour governments introduced immigration control not for economic but for political reasons as a sop to colour prejudice. So much for Labour’s professed stand for the brotherhood of man.
Adam Buick