Book Review: In Defence of Unions 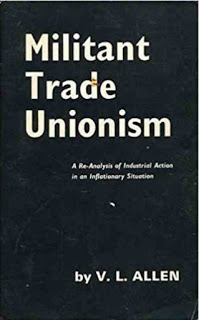 Nearly ten million workers are in trade unions in Britain yet there is a pervading air of hostility to trade unionism. Trade unions, we are told, cause inflation and disrupt production by strikes and restrictive practices. These views are shared and spread by Labour and Tory governments alike. Very rarely is a reasoned case for trade unionism put. V. L. Allen (who spent some time in jail in Nigeria recently for helping unionists there organise a general strike) attempts to do this and does it well enough. His approach is basically Marxist: In present-day society the means of production are the property of a few so that the rest, owning little but their ability to work, must sell it to an employer to live. Trade unions arise out of this market relation between employers and employees, to bargain more effectively over the wages, hours and working conditions of the employees. Strikes are built-into the system and will last as long as it does, even if they are made illegal.

Some of Allen’s points are worth repeating:

The strike then is implicit in a free market transaction and any attempt to interfere with it alters the course of the transaction in favour of employers by adding another disability to employees. Every limitation on the ability to strike adds an element of compulsion on workers to sell their labour-power at prices largely set by employers.
Unofficial action is informal trade unionism occurring because formal unions are incapable of fulfilling their functions satisfactorily and have, for this reason, lost some control over their members.
Strikes are a challenge to the power and authority of employers. They challenge the prices that employers pay for labour, the profits the employers accrue from production, and their prerogative of control over the means of production.

Part of the book is devoted to discussing the series of “crises” and consequent appeals to consume less and work harder we’ve had to put up with since the war—from Cripps with his wage restraint in 1947 and wage freeze in 1949, through Gaitskell, Butler, Thomycroft, Selwyn Lloyd, (and his “pay pause”) to George Brown’s so-called incomes policy. Since Allen wrote things have got worse with the wage freeze imposed by the Prices and Incomes Act.
Allen argues that workers have been asked to make sacrifices to preserve Britain’s role as an international banker. To play this role government’s must keep the confidence of foreign investors. So, in effect, says Allen, workers are asked to make sacrifices for these foreign investors who tend to be hostile to Labour governments. Which means, we might add, that Labour governments have to be more harsh on workers to overcome this prejudice.
This is the weakest part of Allen’s book. He seems to be suggesting his own solution for British capitalism’s problems: end Britain’s international banking role; have a fluctuating exchange rate; and, in the long run, nationalisation and planning. In other words, the old state capitalism that used to be the vision of Labour leaders. What is significant is that it is now the view only of a minority of Labourites. Needless to say, none of these measures will end the commodity status of labour power (which gives rise to unions, protective practices and strikes) or help solve the many problems workers face because we are propertyless in a property society.
Despite this limitation the book is useful to defend trade unionism and refute the lies spread against it.
Adam Buick