It is pathetically easy to poke fun at Royalty. Look at any copy of Private Eye for the yobly kind of satire, or “This England” in the New Statesman for authenticated stories about incidents such as the removal of lavatory signs “to avoid embarrassment” during a royal visit. The trouble with such side-swipes, however, is that they leave the basic nature of the institution unexamined and untouched. (Indeed, for the satire industry to survive it is imperative that this butt of its jokes remains unchanged.)A more difficult, but also more useful, job is to define the exact position of the Queen and the Royal Family in relation to the rest of society. For until we have an understanding of the total situation, we have neither the ability, nor do we grasp the need, to change the social structure.

The first and most obvious point is that the Royal Family are members of the capitalist class. That is, they own so much wealth, in the form of vast estates, that it is economically unnecessary for them to work. This means, for example, that they can enjoy themselves at Ascot and similar places as often as they please, without having to pinch an afternoon off from the office or to wait for their week of night-shift to come round (Not that most of us could afford to go to Ascot even under these conditions). It also means that, like the rest of the capitalist class, the Royal Family can have the very best of everything without having to worry about the price.

However, the position of the Queen and her family within this ruling class is, of course, quite unique—and in a paradoxical way which her title would not lead us to believe. Whereas some capitalists, when they tire of Cannes and caviar, may wish to turn their unoccupied minds to politics it is expected of Royalty that they should be above this sordid fray. The Duke of Edinburgh will be tolerated when he tells the workers in industry to “pull their finger out” but if he starts giving more specific advice on British Foreign policy he hits the national headlines.

As regards the Queen, too, we may agree with the official statement:

“In law, she is the head of the executive, an integral part of the legislature . . .  In practice, as a result of a long evolutionary process during which the absolute power of the monarchy has been progressively reduced, the Queen acts only on the advice of her ministers, which she cannot constitutionally ignore. She reigns but she does not rule. The United Kingdom is governed by Her Majesty’s Government in the name of the Queen.” (Britain. An Official Handbook, H.M.S.O. 1965.)

Stripped of its verbiage this means that despite all the traditional bull, the Queen is merely a rubber stamp.

In this respect the Royal Family provide a glaring example of the redundancy and strictly parasitic nature of the capitalist class in general. Not only do they perform no useful social function but they do not even have to defend their own class interests. Most capitalists choose not to go into politics, and a large part of managing capitalism is willingly undertaken by political careerists from the working class.

Ambassadors
Now it has been argued that the Monarchy does perform a useful function on the grounds that a Monarch can create more good-will the world over than a mere president. Philip and Elizabeth, it is said, are worth their weight in gold as unofficial British ambassadors. But what do their lengthy foreign tours, with all their enormous expense, really achieve? Good-will soon gets flattened under the steam-roller of political reality, as numerous conflicts within the Commonwealth have shown. The fact that both India and Pakistan owe some sort of allegiance to the same monarch does not prevent them from tearing each other’s guts out. And even the great love which the Europeans are reputed to have for Her Britannic Majesty could not get Britain into the Common Market.

But even if it is conceded that these ambassadorial missions have a certain measure of success, that the foreigners warm to us and as a result are more inclined to Buy British—what relevance does this have for those of us whose lives are taken up in earning enough to go on living? It simply means that the wealth which we produce but our employers own may be more easily disposed of on the world’s markets —without this necessarily benefiting us in any way. Thus if the Royal Family can be said to have any function at all, it is that of being public relations officers for the British capitalist class. The latter, after all, are the only people who have anything to sell abroad.

Finance
As for the “reward” (one could hardly call it wages) which members of the Royal Family get for going on long holidays and reading an occasion speech, it certainly proves them to be worth their weight in sterling. The Civil List, the amount of money given every year to the Royal Family, is made up as follows: 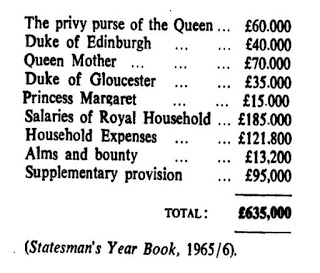 It would perhaps be more fitting if members of the Royal Family stood up for the rest of the population when the National Anthem is played, to show that they appreciate such benevolence. They are given more every year than most of us earn in a lifetime, and in effect they are guaranteed an annual pools win without even filling in a coupon.

As if this were not enough Sir Charles Petrie, in a bigoted anology for the institution of the monarchv (The Modern British Monarchy), laments that certain ladies of the high aristocracy are not included in the list of annual pensions and are forced to “sell their trinkets at Sotheby’s.” He is quite blind to the fact that most non-aristocratic ladies haven’t got a single trinket they would be able to sell at Sothebv’s, nor will they ever save enough to be able to buy one. In essence his statement contains the same absurdity as one made recently by another Royalist: “The Royal Family are really quite poor, you know. They have so many palaces to maintain.”

A second bogus point which Sir Charles borrows from The Times and uses in his book is that since the Exchequer receives more in taxes from the Royal Family than it pays out for the Civil List, “the nation makes a profit out of the Royal Family.” Here again the argument conveniently ignores one side of the facts. For example, we should hardly feel it was the whole truth to say that the nation makes a profit out of someone like Charles Clore on the grounds that he pays taxes and receives no annual pension. We would conclude, naturally, that he must be receiving from somewhere even larger amounts of money than he pays in taxes. And since he is not a member of the employed class his income must be from shares, interest, property and the like.

Moreover, it is quite wrong to say that taxes are a profit of the “nation” in the sense of the majority of people in the country. The taxes go to the government, which uses them in a variety of ways to support and maintain the capitalist machine.

We can only assume that this is the case with the Royal Family, whose income derives from their vast estates and property. This brings us back to our first point: the Royal Family, with all the special and unique features we have considered, are members of the socially superflous capitalist class. ,

Changing altitude
What, now, of current attitudes to this archaic institution in an archaic form of society? The satire we noted earlier is perhaps symptomatic of a more critical and sceptical view with regard to royalism. Most of us have been caught up in the stampedes out of the cinema at closing time and some circuits have given up playing the National Anthem at all.

Such attitudes are preferable to an unquestioning reverence, but they do not go nearly far enough. They do not point the way to any effective form of action; they amount at most to grudging resentment, and at their most innocuous merely to condescending amusement. This is inevitably the case as long as one institution of capitalism is considered in isolation from the rest of society.

For this reason there is no reason to support republicans, who want to abolish the monarchy in favour of an elected head of state such as a president. Presidents command as much extravagant luxury as kings, and top politicians pig themselves to the same excessive extent as Henry VIII (See the photos of the Lord Mayor’s Banquet any year). In short, as long as there is a ruling and a subject class, the top ranks of society will always enjoy the same order of privileges.

Conclusion
Men have come a long way since they believed that Royal Privilege was divinely given, but they have not yet realised that this and every other kind of privilege rests in the last analysis on the private ownership of the means of life.

When they do realise this and take the necessary steps to establish common ownership of and free access to wealth (and that won’t be until you do), then there will consequently cease to be classes, ranks land/hierarchies in society. There will be no Your Majesties, Your Graces or Your Honours, and any respect which individuals command will be based entirely on their merits as useful Contributors to the worldwide co-operative community.

Finally, to those people who anxiously ask “What would happen to the Queen in socialism?” We can only say this: as we have shown, she would cease to be a queen and a member of the capitalist class. The only person who can give you more information than that is Elizabeth Mountbatten.