Book Review: The Flight to Varennes 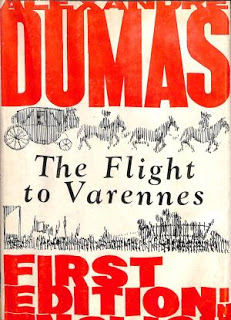 and prolific of nineteenth century dramatic writers, was beloved of the Victorian reader. His many novels, plays and travel books were in constant demand to while away the hours spent in travel on the new railways or during the long winter evenings, before such things as the gramophone, the radio, and more recently television appeared on the scene.
Dumas himself was a product of the railway age. An age of constant and disturbing change, of an optimistic faith in. progress, mixed with a nostalgic yearning for an idealized past. The book opens with the sentence: —

Thanks to the railways, we unfailingly arrive at our destinations; indeed we get there quicker than ever, but we no longer travel.

Similar complaints are heard today about air travel, while we also look with nostalgia on the steam and clatter of the fast disappearing Iron Horse, just as Dumas pined for the clatter of horses’ hooves on dusty roads.
Nineteenth century France, like Britain, was finally emerging as a world power and also like Britain it needed to dream up a great and heroic past. So Capitalism, with its poverty and squalor, its ruthless exploitation and bitter discontent, was clothed in the trappings of Empire, and such works as the Three Musketeers and the Count of Monte Cristo were eagerly read. Like Scott and Ainsworth in Britain, Dumas wrote well; but his style is no longer popular and his readership has declined in the last few decades. Nevertheless his books are ideal material for plays and films, and adaptations from his novels have appeared on television. Often these have little connection with the originals, apart from the title. Cops and robbers in Renaissance costume.
What is not generally known is that Dumas wrote sometimes as an historian. The Flight to Varennes, published for the first time in English by Alston Books, is one of his historical works. Published first in a weekly paper, as was much nineteenth century writing, it describes what is perhaps the most well known incident of the French Revolution; the attempt of the French Royal Family to reach the Netherlands.
Paris in the summer of 1791 was a place of confusion, unrest and brooding violence. Two years had passed since the fall of the Bastille, but the problems mounted. France had become a Constitutional Monarchy; legislation had flowed from the Constituent Assembly in a never ending stream; and the Assembly had voted the Declaration of the Rights of Man. But harvests had been bad and food prices had rocketed. Political factions struggled for power and broadsheets poured from the presses, while behind them all stood the armed bands of Paris. Meanwhile the governments of Europe, fearful lest revolutionary ideas should spread, were massing troops on the borders of France, ready for armed intervention. It was to join these forces in the Austrian Netherlands that was the aim of the attempted flight.

The venture was doomed from the start. Generations of isolation in absolute power, had produced a mentality incapable of grasping change.

But neither the King nor the Queen realised fully how much times had changed. Marie Antoinette had had many new dresses specially made, her favourite hairdresser (the fantastic Leonard) was sent ahead to the frontier and so was her magnificent inlaid Nécessaire: and two lady’s maids travelled with the Queen.
. . . and the flight was made not in light carriages, quick and inconspicuous, but in a great specially-made and luxuriously-appointed berlin, drawn by six horses and accompanied by three liveried bodyguards.

The amazing thing is that they got as far as they did.

Dumas traces the journey from its bungling start on the night of June 21st to its farcical end in Varennes, when in a melodramatic scene that could have been invented for a film, a waggon of furniture was overturned on a bridge, to prevent the fugitives from reaching the Royalist troops waiting on the other side. He also traces their return to a hostile Paris that was prevented from an explosion of mob violence with only the greatest difficulty.

A year later the insurrection of Paris, with its savage butchery, was to sweep away the monarchy and usher in the bloody dictatorship of the Jacobins.