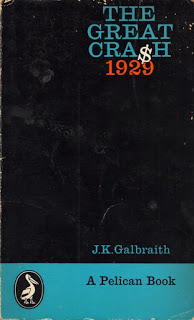 With the echoes of the recent Wall Street upset still rattling in our capitalists’ ears, Penguin Books have chosen a most appropriate moment to re-issue Professor J. K. Galbraith’s book on its notorious forerunner.
The Great Crash, 1929 (first published in 1954) tells the story of the events that led up to that debacle, of the crash itself, and of its aftermath. In it, Galbraith disposes of a number of popular misconceptions and makes many sound comments about economic crises in particular and the capitalist system in general. He debunks the myth that the whole of the American people were playing the stock market before the crash, calculating that there were no more than a million and a half stockholders all told and that of these less than a million were active speculators. This is as we would expect the great majority of the working class, then as now, had nothing to spare from their wages to go on stock market sprees.
Galbraith’s indictment of the economic experts of the time is damning. With a very few exceptions, they were all carried along on the tide of apparently end less “prosperity.” He gives quote after quote to show just how naive and stupid they were: right up to the time the market went into its steepest dive they were still saying that things were “fundamentally sound” and that the worst was over. Only a few days before the catastrophe a Professor Irving Fisher was saying that he expected “the stock market a good deal higher within a few months.” Within a month the New York Times index of industrial shares had fallen from 542 to 224 and was to drop steadily month after month until in July, 1932, it had reached the fantastic figure of 58. During the same month the U.S. steel industry was down to 12 per cent. of capacity and U.S. steel shares were selling at 22. At the beginning of September they had stood at 262.
Galbraith reminds us that although the stock market crash was sudden and catastrophic, it was only the prelude to something far worse. After the Great Crash came the Great Depression which was to last in the U.S. for ten years. The dollar value of production did not get back to the level of 1929 until 1941. In 1933 there were nearly 13 million people out of work or one worker in four. Even in 1938 one worker in five was unemployed and only once, in 1937, did the number of workless drop below eight millions.
A last chapter discusses the possible causes of the crash and very tentatively puts forward some reasons why another might be averted. But these are so tentative as to say virtually nothing Professor Galbraith has obviously learned from the experiences of his predecessors in 1929 not to commit himself too much when it comes to prophesying what is likely to happen under capitalism.
This aside, the book should nevertheless be in the library of every Socialist as a cheap and comprehensive record of what was one of the most shattering upheavals in modern capitalist history. It should be added that Professor Galbraith tells the story exceedingly well; the style is direct, the wit flows freely, there are many apt comments on capitalism, and he holds the interest throughout.
Stan Hampson