“The Scientific Method of Thinking“, by Edward Conze, Ph.D. 5/-. Chapman 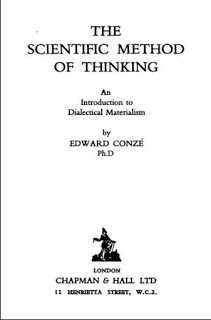 “It is not the consciousness of men that determines their existence,” says Marx, “but on the contrary, their social existence determines their consciousness.” Of course Marx did not mean that human existence and consciousness are entirely unrelated phenomena, since consciousness is obviously a part of existence. The meaning intended is that as men are grouped together either in tribal or civic societies, so does their social means of getting a living give rise to a general outlook or common ideology. In other words, a causal relationship exists between man’s ideas and his material conditions of living. We mention this to indicate that Marxism is not a philosophy which emphasises the influence of environment at the expense of all human action. The same thesis is stated by Marx in another, and perhaps more definite, form, when he says, “Man makes his own history, but he does not make it out of the whole cloth, he does not make it out of conditions chosen by himself, but out of such as he finds close at hand.”

From which it follows that in the Marxian sense man is the active agent in historical happenings, even though the conditions in which human beings find themselves form some sort of guiding background to their activities. Marxism is not fatalism any more than it is “ idealism.” To the fatalist the course of human history lies outside the pale of human effort—we are but puppets hovering and hobbling through life in accordance with some pre-determined force, ambiguously styled fate. To the idealist, history is the outcome of the machinations of men’s “minds”: we will things, so to speak, and lo and behold history is made for good or for bad. But both these forms of thought are incapable of explaining the varied and manifold phases assumed by human society at different times and places. In contradistinction to this, the Marxian concept may be given as an example of its own validity. It sees in the class structure of modern society the condition of its own birth and the means of its own fulfilment in the conscious social transformation of existing economic and political conditions—the active element in this process being the working class. But why this class alone, and not society as a whole, is a question which necessitates an understanding of a scientific method of thinking, such as we are now considering. It may, of course, be said that scientific method is essential, apart from the matter of working-class emancipation, to which we would readily assent. But there’s the rub. Ours is a special task called forth by the peculiar nature of the problem to be analysed and solved. The composition of class society involves conflicting interests which produce rival interpretations of social phenomena. A capitalist defender of capitalism can hardly view working-class problems in the same way and with similar results as the workers.

The ever-pressing economic needs arising from social status are bound to influence and determine judgment. Old Ludwig Feuerbach stressed this fact from another angle of view when he declared that, “One thinks differently in a palace than in a hut.” To remove the conditions of the hut is the need of the working class alone; the capitalists have no such need and can be relied upon to retain possession of the “palace” so long as the working class permit.

It is upon this point that the dialectic of Marx, if rightly interpreted, will serve as a method of our unravelling the complex nature of capitalist society, and as a means toward Socialism.
It should be clearly understood, however, that dialectical materialism in its widest sense embraces a terminology, the subject matter of which needs special study. We have such phrases as “The Unity of Opposites,” “The Negation of Negation,” and “The Transformation of Quantity into Quality,” all of which would necessitate lengthy explanations of their meaning. We suggest that the ablest account yet written is Engels’ classic “Anti-Duehring.” Here Engels presents us with examples of the actual working out of dialectical laws in nature, human history, and thought. In geology, chemistry, agriculture, mathematics and economics Engels gives an account of the way in which the dialectic operates, facts which impelled Engels to remark that “Men thought dialectically a long ti

me before they knew what the dialectic really was, just as they spoke prose a long time before the term ‘prose’ was used.”
In the immediate sense it is on the subject of social development and change that the knowledge of the dialectic is needed. The principle works as follows : The capitalist system makes the productive forces social in the sense that giant means of wealth production are brought into being requiring the combined operation of masses of workers. The workers in consequence are rendered more and more a subject class. The wealth is socially produced, but individually appropriated. The capitalist class who own the wealth the workers have produced see to it that only such portion of the wealth is allowed the workers as will permit them to maintain themselves as a dependent class. This causes a number of other anomalies to arise. Apart from the effect of the workers being compelled to endure poverty amidst plenty, there is the fact of the capitalists’ failure to keep the productive forces continually operating. Further, they even stultify the otherwise expansion of the means of producing wealth, as their economic interests determine from time to time. The blows from all this fall heaviest upon the working class, which class is compelled sooner or later to seek a way out through taking over the means of living in their own interest by establishing Socialism. The forces making for Socialism are, therefore, historically and socially conditioned by capitalism, as in a somewhat similar manner capitalism was conditioned by the social forces, of feudalism. This historical process is described by Marx and Engels as “the negation of negation.” Capitalism is negated by its own internal contradictions, just as it had negated feudal society through like causes. In their statement of this; principle, both Marx and Engels used fairly clear-cut language to describe their point of view. We wish we could say the same of many who have set out to explain the meaning of dialectical, materialism in general. The great danger hovering around the subject of dialectics seems to be with, those who misuse it to justify every twist and turn of policy. We may be able to reconcile the irreconcilable as a form of thought, but our task chiefly consists of sifting the essential from the non- essential in our purpose. But let us now resume company with Dr. Conze. He postulates what he considers to be the four laws of scientific method; they are as follows:

Regarding the latter, he rightly warns us to distinguish between contradictions of the mind and those of objective reality. Contradictions of the mind may “put” us into awkward “motion” —into the safe custody of a lunatic asylum. In discussing why dialectical materialism is so little understood, Dr. Conze seems to think the Russian Bolsheviks to be among the chief causes. He says that “in casting out religion the Bolsheviks have elevated the fundamentals of Marxism, to the level of a substitute religion,” and further complains that the study of philosophical works is discouraged in Russia “on the ground that since Marxism is the philosophy of the proletariat, all other philosophies are bourgeois (which is partly true) and, therefore, deadly mental poison (which is ridiculous).” But be this as it may, we suggest that the main reason for the non-understanding of Marxism rests upon the fact of the pre-occupation on the part of the workers with the many phases of capitalist thought. On the subject of mind and economics in society, Dr. Conze easily dismisses those “social psychologists” who are all mind and no economics, their failure to recognise the interaction of ideas and economic conditions being well noted. In the case of mass psychology, these people are always apt to regard the “crowd” as “incapable both of reflection and reasoning.” But’ Dr. Conze falls into error when he attempts the same charge against Socialists. He asserts that “Socialists are also inclined to despise the masses when they see them desert to the enemy; they suddenly assume that demagogues can swing the masses round and so deprive them of their critical faculties that they will support their own enemies.” But Socialists really know better than this. The workers swing from one political position to another because their minds are mainly on the capitalist roundabout. They have not yet realised that capitalism is their real enemy and the way to end it.
Regarding “Great men and history,” Dr. Conze contrasts two conflicting lines of thought— one which, à la Thomas Carlyle, regards history mainly as a “biography of great men,” the other which denies the influence of great men totally, and counts the masses as everything.
In reply to this, Plekanov is well cited as saying that “If history is made by human beings, it must obviously be made by ‘great men’ among the rest.” To this, but under proper qualification, all Socialists will agree. Against those who concentrate on the destructive side of Socialist activity, whoever they may be, Dr. Conze thinks with Blanqui that these people are “invaluable before a revolution, but should be shot the day after its victory.”
However, in general, we think the author of “The Scientific Method of Thinking” has done well in bringing this volume to life despite the many things we could continue to discuss in disagreement. In the main, we agree with his statement of the dialectical standpoint, and commend his book to students, but in so doing we should like to refer those who are about to take their first plunges into materialist thought to one more statement of Marx. In his celebrated thesis on Feuerbach Marx says: “The life of society is essentially practical. All the mysteries which seduce speculative thought into mysticism find their solution in human practice and in concepts of this practice.”