Professor Sir Arthur Keith is an anatomist with a considerable reputation. He occupied the presidential chair at the annual meeting of the British Association at Leeds barely two months ago, and caused a journalistic stir by his review of that controversial topic, “Man’s origin.” This has recently been published, with additions, by Messrs Watts (price 7d.). It is with the concluding essay that the present scribe proposes to deal.
It is entitled “Capital as a Factor in Evolution,” and advances the view that 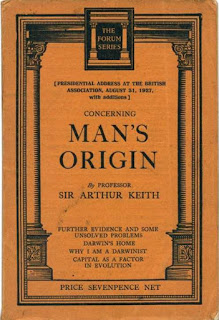 capital is an indispensable element in all progress, organic and social. We are fairly well acquainted with that type of anti-Socialist to whom all tools are capital, and consequently all tool-owners are capitalists, no matter whether it be plain Bill Smith who has “set up on his own ” as a plumber, or romantic Robinson Crusoe, when he discovered the utility of a hammer.
Sir Arthur, however, presents us with a rather interesting variation of this fantasy. According to him, any means of subsistence not immediately consumed is capital. Thus the bees which store up honey, fowls which lay eggs, our mothers when in a certain condition (with milk available) are all really capitalists, little though they may dream it. One can imagine the bosom of the speculative investor swelling with pride at finding himself classed with such time-honoured institutions.
We fear, however, that Sir Arthur has been too well brought up to be sufficiently comprehensive.
For instance, he omits entirely to mention those interesting examples of industrious capitalists, the bug and the common flea. It is a matter of observation that they cannot pursue their activities indefinitely but make periodical retirements in order to consume the sanguinary fluid which they have so assiduously acquired and stored up within the appropriate portion of their anatomy. Small wonder that the average pseudo-Socialist is staggered when faced with the question, “ What would you do without capital?” Existence would be unrecognisable to him. 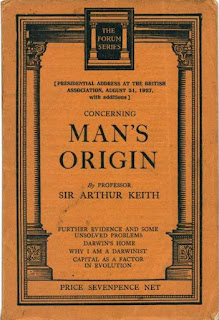 To return to our professor. “There is,” says he, “in most of us a wish to save something from our daily income, be it large or small, to carry us over days of dearth or sickness. We save, too, for quite another purpose, namely, to give our children a start in life . . . and if it so happens that those parts of unconsumed wages, etc., are not required for instant use, then we consult the financial columns of a newspaper, or produce a stockbroker’s list, and presently our savings are turned into capital. Before we realise it, our savings are being used to build a merchant ship, or a cotton factory, etc.”
Notice the naive way in which our anatomist (so keen in his own department of knowledge) skips over the vital point. At one moment all savings are “capital,” irrespective of the use to which they are put, from the corn in the granaries of Ancient Egypt to the stores of food which Scottish students used to bring from their fathers’ farms to keep themselves through the winter at the universities. Then, in the same breath as it were, we have the implied admission that savings require to be “turned into capital” by the process of investment. The merest tyro in finance knows that money is not invested simply in order that it may return to its owner at a later date. It is invested in order that it may yield a profit, or acquire an increase. Sums of money cease to be capital when they are simply spent on articles of personal consumption, no matter how long they may have been saved. To “live on capital” is to destroy capital. Capital can only live on labour. It must maintain contact with the process pf production. By ignoring this elementary fact the henchman of “science” loses the meaning of the term he discusses.
In the course of its development capital takes a variety of forms. Here it is means of subsistence of the workers, there it is the tools with which they work; but in either case these things are capital only because they are consumed with a view to producing commodities for sale at a profit. Because capital takes the form of means of subsistence and tools, some people assume that all tools and means of subsistence are capital. One might as well say that because admirals are sailors, all sailors are admirals. If, for instance, the tools of the handicraftsmen in the middle ages and their food stores and raw material are to be regarded as capital, then the distinction between capitalism and all previous forms of society disappears. We are left without any reason for describing other systems as feudalism, patriarchalism, etc. This loose mode of thought destroys the meaning of words and robs them of all value.
All of which goes to show that men of science can be just as useful to the ruling class as agents of confusion as the priesthood. As Sir Arthur himself puts it in his preface, “men of science and religious leaders have the same ideals. ” In other words, they are both maintained by, believers in, and upholders of—capitalism.
Eric Boden