A Tilt at a Travesty 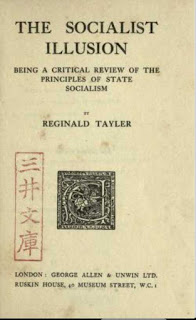 immediately qualifies his title by describing the work as “a critical review of the principles of State Socialism.” It is difficult to tell from the reading whether the author is aware of the wide difference between Socialism and the purely capitalist notion of nationalising industries under the control of the capitalist State. In places it would almost appear that he does realise this difference, though nowhere does he attempt to prove his “Socialist illusion.” Instead, he shows the fallacies of State Socialism and nationalisation, though this has been done long ago by the Socialist, and far more effectively.
In a long chapter entitled “Economic Factors” Mr. Tayler labours pitifully to persuade his readers that the capitalist only gets a very small share of the total wealth produced and that he is really necessary to production. In another chapter, on “State Confiscation,” he says that the Labour leaders, while denying that Socialism means confiscation, mean that and nothing else. Holding this view he should have tried to show the fallacy of trying to establish a new order of society after the capitalists had been expropriated. Instead, he devotes his space to the much easier task of showing what a financial mess the State would be in if it took over certain industries, either paying for them or guaranteeing a dividend or interest, while at the same time fixing a higher standard of living for the workers, maintenance while unemployed, etc.
“The State as Captain of Industry” heads another chapter, in which it is declared that trade, under salaried managers, would languish and die, forgetting meanwhile that the big and thriving concerns under capitalism are run in this way, and are rapidly ousting the small concerns managed by their owners. In chapter 6, where our author pretends to deal with the question of production under Socialism, it would almost appear that he is entirely ignorant of the meaning of the word Socialism, or even of many of the phrases he uses, such as “production for use,” “under Socialism there would be no trade in the sense in which we understand it,” etc. Under Socialism, he says, every undertaking would have to pay its way, consequently useful services, like railways, etc., will cease to be run because the extra costs of running would swallow up the small dividend now paid.
Instead of levelling his criticism at Socialism Mr. Tayler merely tilts at nationalisation, the red herring that the Labour Party drags across the path of the workers. This is the more remarkable seeing that he deliberately accuses the Labour Party of being out for confiscation, which by depriving the capitalist class of ownership in the means of wealth production, would naturally leave them in the workers’ possession. His chief mistakes are due to the fact that he has failed to conceive the possibility of the working class attaining sufficient knowledge to establish a system where the means of life, being owned in common, could be operated according to a settled plan without the intervention of trade.
Under capitalism exchange, or trade, must take place because the product of labour is privately owned. But under Socialism it becomes merely a question of producing and distributing, or making available the goods and services required. Each member of the community would take part in the necessary labour and enjoy the fullest life possible under the existing conditions and development of the means of production.
Mr. Tayler sees in capitalist society the distribution of goods taking place on a basis of exchange and imagines that it is this exchange that effects the distribution. But the exchange is merely a social arrangement ; the actual distribution is a result of working-class activities. The workers first produce and then move the goods to where they are wanted. The social arrangement that imposes exchange on top of these quite adequate operations are those historically developed institutions, private, or class, ownership of the means of wealth-production—and therefore of the wealth produced— and the commodity character of human labour-power. On these trade and commerce are built up, and Mr. Tayler on page 21 exclaims, “A marvellous thing is commerce” and on page 23, “Socialists in destroying commerce would destroy the machinery for producing wealth.”
True, commerce is a marvellous thing, not for the production of wealth, however, but for its appropriation by the ruling class. Commerce enables the capitalist class to realise the surplus-value contained in commodities, the difference between the wages paid for their production and their real value. Mr. Tayler has read all about surplus-value and his only comment is that “so far from there being a surplus, there is in a large proportion of cases a minus” (p. 53). And again on p. 132, “It was always nearer the truth, and is so still, that Labour received at least eleven pence in the shilling and often the entire shilling.” He tries to prove these wild statements by imaginary cases of concerns that have gone on paying wages when no profits have been forthcoming, and by figures recording capitalist failures. But whether a firm fails or succeeds is not evidence that the worker’s commodity is paid for above its value.
But “what a marvellous thing is commerce” from the worker’s point, of view! The competitive struggle for markets between capitalists falls entirely on the workers. It is they that must produce ever more cheaply by working with greater intensity for wages that are continually being reduced with the slackening of demand. It is the workers, too, that starve when there is abundance, when the markets are choked with commodities they cannot buy because they are unemployed. Truly a marvellous thing is commerce, Mr. Tayler’s machinery for producing wealth—those who work it cannot satisfy their own needs, while those who own it are powerless in the face of its staggering over-production, which is the root cause of the intense conflict for markets.
Sometimes our author exposes his own lack of understanding of ordinary terms and definitions. On page 49 he says :

“So also the labour power expended upon a commodity is not more than one factor in its production. Take for example the machines which are used. Probably the actual construction of the machines has been the result of mechanical labour, but who knows exactly what brain power has been expended in the invention and development of the machine, and not only of the machine as a whole but of the many individual parts which in their turn have demanded the application of the brain power of perhaps scores of persons not one of whom was a mere artisan.”

Here we see that his conception of labour-power is “mechanical labour” or the labour of “artisans,” whereas within the term labour power is included not only low-skilled labour, but the organising abilities of the foremen and managers, and even the intellectual qualities of professionals. The fact that the possessors of such forms of energy have to sell them in order to live, places them all in the same category, i.e., purveyors of labour power. All are combinations of nervous and muscular energy. In supposing that labour power means only that combination of nervous and muscular energy common to labourers and artisans, Mr. Tayler shows a lamentable ignorance of bourgeois economics, which long ago accepted the definition of labour power given above.
Again on p. 27 he shows that he is incapable of drawing a correct conclusion from his own facts. In a paragraph too long to quote in full he supposes a group of capitalists who pool  their money, build a factory, install machinery and provide raw materials. He then says: The workmen are got together, they do their first week’s work and receive a large sum collectively in wages. The capitalists have meanwhile received nothing.” We might ask Mr. Tayler to whom the product of the first week’s work belongs, and if that product is nothing.
But on page 51, when our author finds it necessary to show that capitalists are business-like as well as philanthropic, he finds himself in agreement with the Socialist, for he says that “the manufacturer, being a business man, buys labour power just as he would any other commodity with the hope of making a profit therefrom.” His group of capitalists, therefore, were possessed of the best intentions towards themselves, even if ultimately they failed to build up a thriving concern.
Mr. Tayler’s chapter on “State Confiscation” is very amusing. On page 58 he says

“Marx sought to prove that the capitalist was a spoiler and a robber, and the present-day followers of Marx—that is to say practically all those persons who call themselves Socialists—believe that theory. Now to take from a robber his ill-gotten gains and hand them back to the rightful owners is not confiscation but restitution.”

As Mr. Tayler throughout his work has failed to disprove the charge of robbery he cannot logically object to restitution.
On page 59 he says

“How can anyone suppose that the notion of compensation would ever enter the heads of such people. To compensate a robber and bespoiler would be the height of absurdity. Besides, who would compensate ? Not the workers themselves, because if they had it in their power to give value for value they would be in no different position than before. And in any case to pay for the good things of life would be quite a prosaic proceeding compared with obtaining them by political power, suddenly and in immense quantities, on that great day when the shackles of economic slavery fell from the limbs of the workers.”

But Mr. Tayler is afraid to follow this line of reasoning which knocks the bottom out of Fabian and l.L.P. nationalisation schemes and at the same time renders all his subsequent remarks superfluous because they are directed against just such schemes of nationalisation based on the condition of compensation. It is significant that he does not attempt to deal with the correct Socialist position because he says emphatically, though without evidence to justify the statement, “When Labour agitators speak of nationalisation they mean confiscation, for nothing short of this would really satisfy their aspirations.”
The foregoing do not exhaust the errors, misrepresentations, and contradictions contained in the book. These are to be found on every page. There is nothing new, and no argument that has not been tried against Socialism before and smashed to pieces against its invulnerable principles. All the old bogies are hashed up afresh in the struggle to frighten the workers away from Socialism. But those who understand the principles of Socialism will be quick to see how pitifully weak it all is.
F. Foan