Looking Back on Edward Bellamy 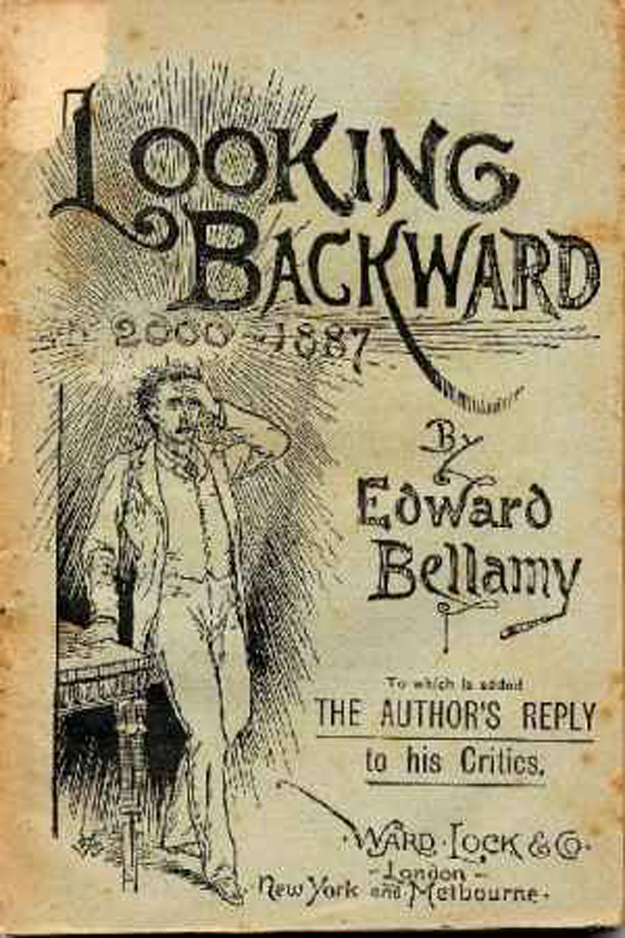 In 1888 a book by Edward Bellamy, Looking Backward, was published which had an enormous impact at the time. It could even be said that it marked the take-off of modern socialist ideas in America.

Bellamy was a New England journalist and writer who had travelled widely. His utopian novel is based on the story of a rich young Bostonian, Julian West, who is sent to sleep by mesmerism and does not wake up until the year 2000, by which time a far-reaching economic and social revolution has taken place in America.

As explained to him by his host, Dr Leete, all land and industry is now the collective property of the whole community and run as a public service to supply people’s needs. People no longer work for wages, and money has been abolished. Instead, everybody is required to serve in an industrial army between the ages of 21 and 45 and in return receives an annual credit, which is equal for everyone, in the form of vouchers entitling them to draw a given amount of goods and services from the common store. Differences between the nature of jobs would be taken into account by adjusting the number of hours the people doing them would be expected to work. The functions of government, Dr Leete explains, now reduced essentially to the organisation of production for use are exercised by the general council of the industrial army whose members are elected by those who have retired from industrial service, i.e. by the over-45s.

Bellamy depicted a technologically advanced society, imagining some technological advances that would have taken place between 1888 and 2000, for instance moving pavements, music piped to every house, and goods delivered to homes by pneumatic tubes. Reality (airplanes, motor cars, radio, television, electronic computers, internet, mobile phones, etc) turned out to be much more amazing than anyone in 1888 could have imagined, but this strengthened rather than weakened Bellamy’s case.

Although the industrial army aspect is over-painted (and Bellamy himself watered it down in his later writings), all the essential ideas of the socialist movement as it was to develop in America were there: collective ownership of all land and industry on a national scale, production for use not sale or profit, social service instead of working for wages, economic equality, industrial administration replacing political government.

Bellamy himself never referred to himself as a socialist, apparently feeling that the foreign associations of the word would put off American public opinion which he was seeking to convince. He referred to his system variously as ‘national co-operation’, ‘nationalized industrial system’ and even as ‘public capitalism’. The movement which sprang up on the basis of the ideas expressed in his book was called the ‘Nationalist’ movement. Nevertheless, his was a powerful indictment of private capitalism and its effects on the propertyless majority which it both created and exploited. Many of those influenced by Bellamy were not afraid to call themselves socialists. In fact they easily moved from his Nationalist movement to Socialism, including Daniel De Leon who joined the Socialist Labor Party in 1890 and became its leading figure till his death in 1914.

The attraction of Bellamy’s book was that it put forward a solution to the social problems, brought about in America by the development of industry under capitalist conditions since the Civil War, and which did not reject industry and industrialisation, but which on the contrary fully accepted them as providing the means to supply plenty for all.

When people like De Leon left the Nationalist movement and became socialists, they did so not because they disagreed with the goal but because they disagreed with Bellamy’s strategy for reaching this goal. Bellamy thought that a ‘nationalised industrial system’ could come about gradually through the trustification of industry and then the piecemeal nationalisation of these trusts, and steadfastly refused till his death in 1898 to entertain talk about socialism and the class struggle. He got no further than supporting the People’s Party (Populists); in fact most of the Nationalists who did not go over to calling themselves Socialists were absorbed into the Populist movement.

De Leon and the others who broke away over this issue saw Bellamy’s system, which they were not afraid to call socialism, being achieved through the working-class victims of the competitive system organising politically and industrially to dispossess the private capitalists, so making all means of production the common property of the community (or rather of ‘the nation’ as they sometimes revealingly put it). Like Bellamy, they envisaged ‘political government’ being replaced by ‘industrial government’, though their conception of this latter was more democratic than Bellamy’s since they envisaged the members of this ‘central directing authority’ being elected by those working in the various branches of industry, an idea Bellamy had rejected in Looking Backward as being bad for the discipline of his ‘industrial army’.

When William Morris reviewed Looking Backward in the Socialist League’s paper, Commonweal, on 22 June 1889 he made the point that one of the dangers of socialist utopian novels was that some people would take them as a description of what socialism was going to be like rather than as seeing them as the author’s preference as to what he or she would like it to be (a point to remember, as Morris himself made clear, when reading his utopian novel News from Nowhere written precisely to propose an alternative vision of the future to Bellamy’s).

In his review Morris criticised the regimentation and centralisation Bellamy depicted and, like other socialists of the time, challenged his view as to how socialism would come about. Above all, he criticised Bellamy’s attitude to work. Like many others, Bellamy saw work as something inherently unpleasant which people had to be obliged to do and which society should aim to minimise. Morris’s view, on the contrary, was:

Morris point is a reasonable one but views similar to Bellamy’s still circulate amongst critics in America of capitalism, for instance in the Zeitgeist movement (which wants to automate everything) and Parecon (which is based on the assumption that nobody will work without some form of compensation as an incentive).

This said, Looking Backward was an important work in the development of the socialist idea in America which in turn had an influence in their development in other parts of the English-speaking world including Britain.