The General Strike: A Weapon of Class War 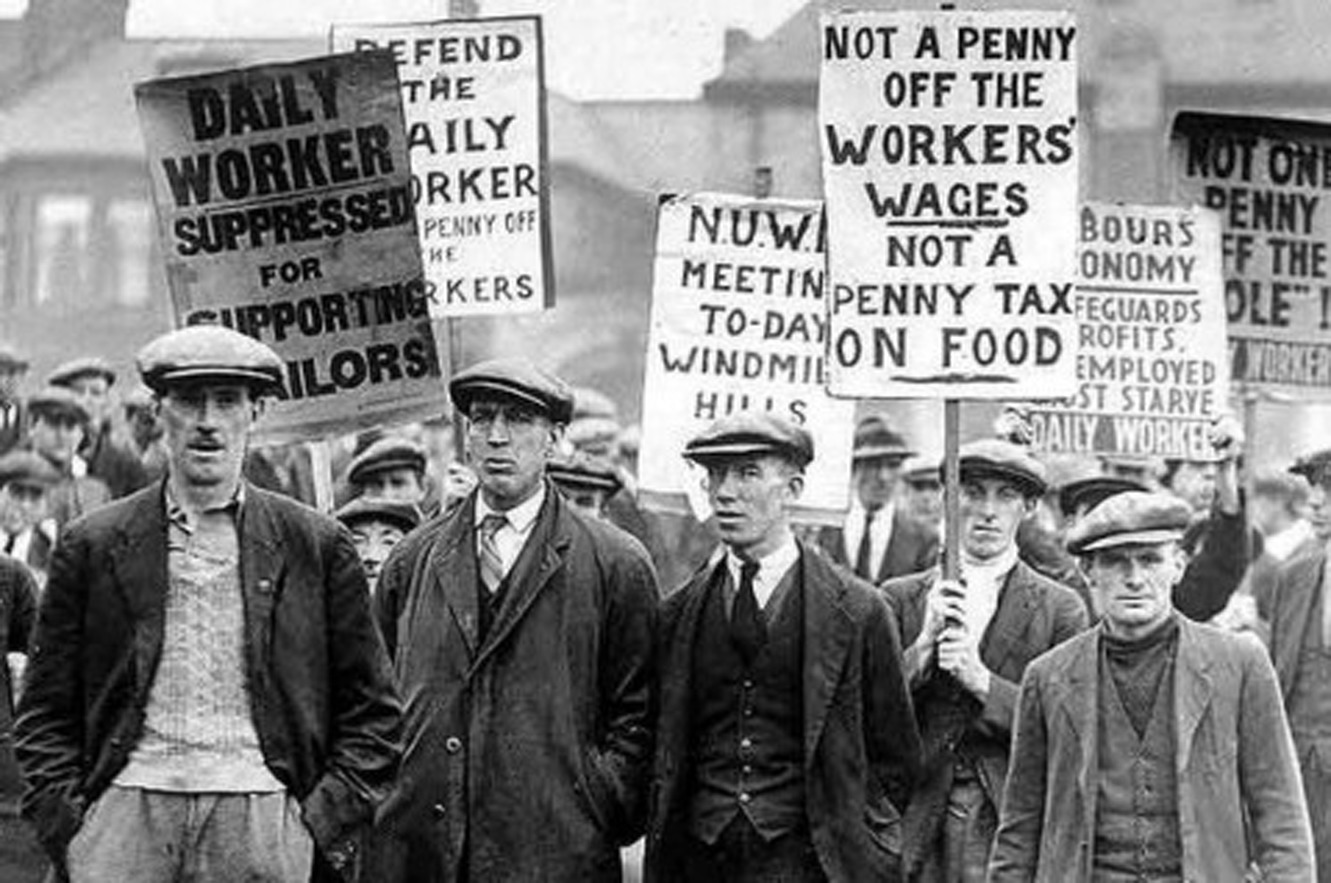 On the 90th anniversary of the 1926 General Strike we look again at its lessons and at the uses and limitations of this class struggle tactic.

The General Strike lasted from 3 to 12 May in an attempt to defend the miners. It has been claimed that a significant proportion of the union leadership actually feared victory. ‘I am not in fear of the capitalist class. The only class I fear is my own,’ said J.R. Cleynes of the General and Municipal Workers Union. Trade union leaders were not going to challenge the state even though as the strike continued, more and more control over the day-to-day functioning of society passed into the hands of the strikers. The TUC General Council betrayed every resolution upon which the strike call was issued and without a single concession being gained. The miners were left to fight the mine-owners, backed by the government, on their own.

Most commentators agree that the strength of the strike came from the solidarity of the grass-roots mass support and the weakness from above by an indecisive bureaucracy. ‘There’s never been anything like it. If the blighters o’ leaders here dinnae let us down we’ll hae the capitalists crawlin’ on their bellies in a week. Oh boy, it’s the revolution at last,’ said one striker in Glasgow. Revolution was exactly what the trade union leaders didn’t want. The General Strike had opened a Pandora’s Box and in the words of NUR leader Charlie Cramp — ‘Never again!’ and said Ben Turner of the TUC General Council: ‘I never want to see another.’ The trade union activists’ shock at the call-off was only matched by the employers’ and government’s unexpected surprise.  ‘A victorious army disarmed and handed over to its enemies,’ declared another Glasgow striker.

The Socialist Party realistically understood that there was no immediate question of revolution. We favoured the general strike for the limited objective of exerting massive pressure upon employers to concede over pay or conditions. We had advocated:

‘…combined action by the workers to resist the wholesale onslaught by the masters upon wages and working conditions… that the old sectional mode of industrial warfare was obsolete; that, while the development of industry had united the masters into giant combinations, with interests ramifying in every direction, supported at every point by the forces of the State, representing the entire capitalist class, the division among the workers, according to their occupations, led automatically to their steady defeat in detail. The only hope, even for the limited purpose of restricting the extent of the defeat, lay, therefore, in class combination… economic and political ignorance kept the workers divided and the defeats went on. Yet even worms will turn, and rats forced into corners will fight …There is a limit even to the stupidity of sheep; and not all the smooth-tongued eloquence of their shepherds could prevent the flock from realising that they may as well hang together as hang separately.’

‘As an expression of working-class solidarity the response of the rank and file was unquestionably unprecedented; but the long months, nay, years of delay found effect in the official confusion between ‘essential’ and non-essential occupations, the handling of goods by some unions which were banned by others and the issuing of permits one day which had to be withdrawn the next. Just prior to the strike the railwaymen were working overtime providing the companies with the coal to run their blackleg trains …’

In particular, we urged the working class to learn the lessons of the General Strike:

“The outlook before the workers is black, indeed, but not hopeless, if they will but learn the lessons of this greatest of all disasters. ‘Trust your leaders!” we were adjured in the Press and from the platforms of the Labour Party, and the folly of such sheep-like trust is now glaring. The workers must learn to trust only in themselves. They must themselves realise their position and decide the line of action to be taken. They must elect their officials to take orders, not to give them! … It is useless for the workers either to ‘trust’ leaders or to ‘change’ them. The entire institution of leadership must be swept by the board.” At the time we urged workers that they “must organise as a class, not merely industrially, for the capture of supreme power as represented by the political machine… The one thing necessary is a full recognition by the workers themselves of the hostility of interests between themselves and their masters. Organised on that basis, refusing to be tricked and bluffed by promises or stampeded into violence by threats, they will emerge victorious from the age-long struggle. Win Political Power! That is the first step.’

The general strike as a tactic

The idea of carrying through a social revolution by means of a ‘folded arms’ policy is romantic. A stoppage of production and transportation is not enough to bring about the overthrow of a society. Strikers will stand idly outside places of work, and even if the workers occupied and took possession of the factories and offices, it is a pointless exercise for they cannot function while the economy is suspended and production is stopped by the universal strike. So long as a class does not collectively own and control the whole social machine, it can seize all the factories and offices it wants to, but it really possesses nothing. The failure of a general strike involves real suffering, and discouraged and disconsolate, defeated strikers withdraw from the movement into passivity and apathy.  A general strike is ‘All or nothing!’ Workers should think twice about supporting such a gamble.

There are some who seek to transform a proposed general strike against austerity, for instance, into a political general strike, using the opposition to the cuts as the slogans to mobilise around. They expect that because of a sustained general strike the normal economic life of the country will be suspended, and there would be a total stoppage in distribution and in production. Naturally, workers would be forced to adopt more forceful methods in order to live. They would seize food and other provisions wherever they could lay hands on them. The ruling class would respond in kind with repression and so the general strike is envisaged to escalate into a revolutionary scenario. That is the idea of the ‘revolutionaries’. But this sort of strategy is a trick to delude the working-class. It proposes to drag them far beyond what was proposed. To imagine that a social revolution can result from misleading workers in such a manner is nonsense.

Although the general strike is quite powerless as a revolutionary means of liberation for the exploited class, nevertheless it is a potent warning to the capitalist class. It tells them if they are crazy enough to make the right to unite in trade unions and the right to strike empty forms, then a general strike may well be the shape that a labour revolt would take. It would be more as a means of damaging the enemy to save ourselves than a means of liberation. The trade union movement has proven itself to be a powerful instrument of a defensive character.

The strike weapon is the workers’ only means of defence or attack which it has for the protection of its immediate material interests.  Working people are right to jealously guard the right to strike. While the Socialist Party fully supports this right for all workers, it is not our business to incite them to make use of it. It is not for us to urge or discourage strikes. It is for those immediately involved, those who will have to endure the consequences of their decision, to decide without pressure of any kind from outsiders. When those workers whose interests are at stake have decided upon a strike, other workers including socialists ought to aid them to gain every possible advantage from the situation in which they have placed themselves.

That is, generally speaking, what is and what should be the conduct of socialists so far as strikes are concerned. We acknowledge the strike as a weapon, but recognise that its effectiveness should not to be exaggerated and that it possesses limited power. Under favourable circumstances it may compel some employers to yield to union demands but it has never been able to produce any radical change in the capitalist system. Here or there some ameliorations have been achieved but they have not been incompatible with the increasing prosperity of capital.

The political expropriation of the capitalist class today is its economic expropriation tomorrow. To win for socialism the greatest possible number of partisans, that is the task to which the Socialist Party concentrates its efforts. What is necessary is to make socialists, to bring people’s wills into harmony with a movement that seeks the election of more and more socialists to our various elective assemblies. The political expropriation of the capitalist class today can be its economic expropriation tomorrow and the transformation of wage labour to the free association of workers and common ownership.