Ukraine: Between Oranges and Blues 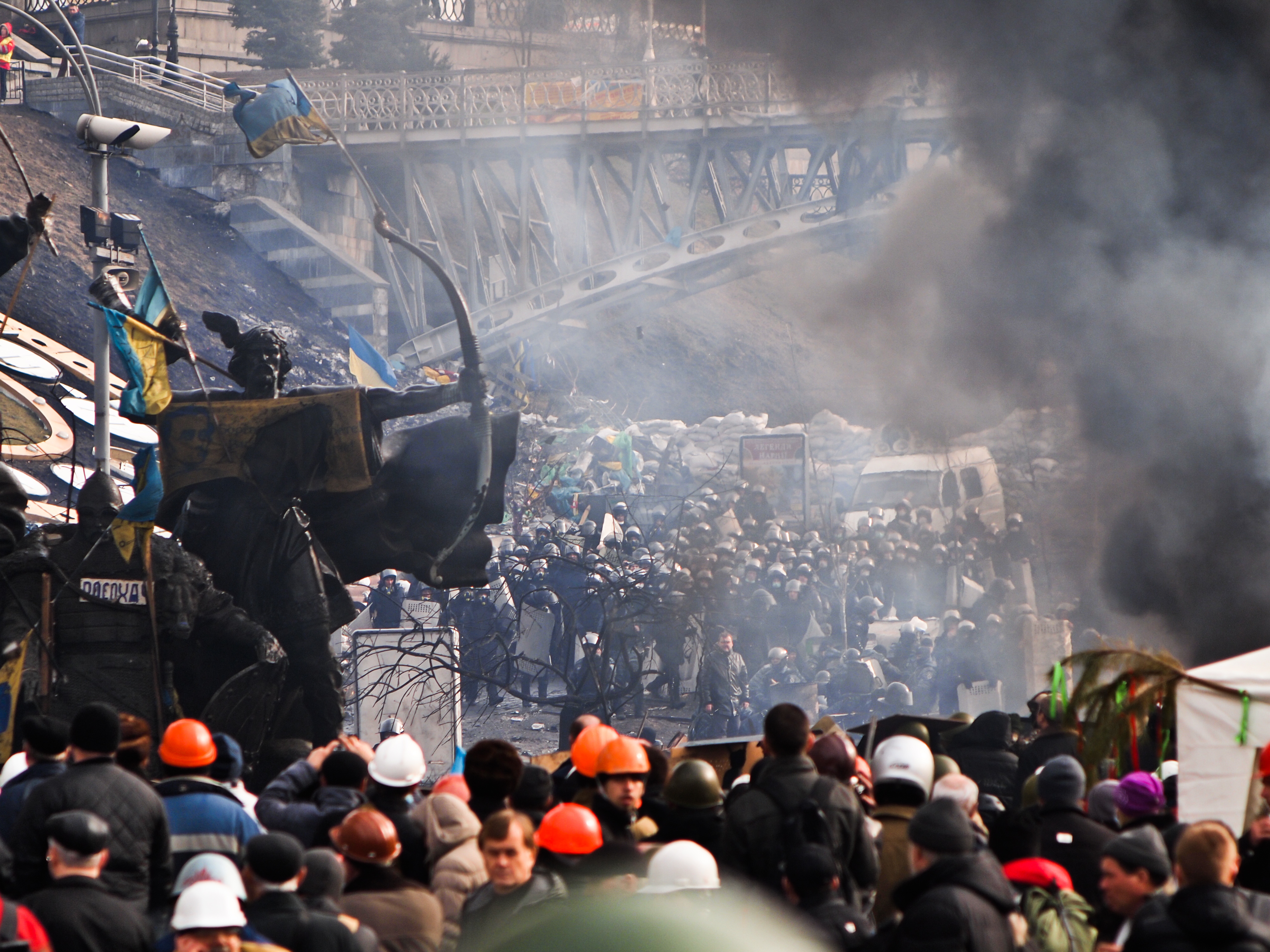 The basic pattern of political confrontation in Ukraine has remained the same ever since the disintegration of the Soviet Union in 1991. The two camps in Ukrainian politics are labelled Oranges and Blues – a usage that has its origin in the “Orange Revolution” of late 2004 and early 2005 that brought Viktor Yushchenko to power. The main features of the Orange and Blue camps are shown in the Table.

The underlying division is basically regional in nature. Most people in the western and central parts of Ukraine, including the capital Kiev, support the Oranges, while most people in the country’s eastern and southern regions support the Blues. The regional division shows itself not only in politics but also in differences of language, historical background, economic structure and attitudes toward other countries.

Mostly agricultural West Ukraine, also known as Galicia, belonged to the Austro-Hungarian Empire before World War One and to Poland between the wars. It is overwhelmingly Ukrainian-speaking (except for some border areas) and the most fervently nationalist and anti-Russian part of the country.

East Ukraine, especially the Don coal basin (Donbas), formed an integral part of the late tsarist and Soviet industrial complexes and therefore depends on close ties with Russia. Many of its inhabitants speak Russian or a mixed Russian-Ukrainian dialect called surzhyk. This does not mean that they do not regard themselves as Ukrainians, but they view Russian and Ukrainian identities as closely related rather than opposed to one another.

The southern and central regions of Ukraine are in some ways intermediate between East and West Ukraine, with the south more like the east and the centre somewhat more like the west.

Despite the regional division, all parts of Ukraine are similar in important respects. The dominant social group in all regions now consists of ‘oligarchs’ – individuals who made fortunes by exploiting their close connections in government and acquiring state-owned assets on the cheap. It is estimated that just fifty oligarchs control 85 percent of the country’s GDP. Many of them have backgrounds in organized crime.

Oligarchs own the mass media and football clubs as well as banks and means of production. Most if not all of Ukraine’s numerous political parties are funded, controlled or even directly led by an oligarch or by a small group of oligarchs. This includes political parties with names that suggest a leftist or environmentalist orientation, such as the United Social Democratic Party of Ukraine and the Party of Greens of Ukraine.

The oligarchs are themselves divided along geographical, political and other lines. There are said to be rival oligarchic ‘clans’ based in different cities – Kiev, Donetsk, Dnepropetrovsk, Kharkov, etc. This is probably an oversimplified picture. In any case, the oligarchs have shared class interests vis-à-vis the rest of the population. If they ever do face a serious challenge from below, they can be expected to form a united front. We shall then also see how much they really care about human rights.

Maintaining political stability in Ukraine depends, among other things, on reconciling the essential interests of its various regions. In some policy areas this has been achieved. One example is the working compromise on the language issue. While Russian is not recognized as a second state language alongside Ukrainian, no serious attempt has been made to restrict the use of Russian in places where Russian speakers are in the majority. Another is Ukraine’s status as a buffer zone outside both NATO and the Russian-led military alliance of post-Soviet states (the Collective Security Treaty Organization).

On some issues, however, such a compromise is not feasible. One such issue is the choice of an external orientation for Ukraine’s economy. Should Ukraine go ahead with the Association Agreement it has negotiated with the EU? Or should it join the Eurasian Economic Community (EAEC) – the post-Soviet customs union that now includes Russia, Belarus, Kazakhstan and (since last September) Armenia?

In November Blue President Viktor Yanukovych, faced with the alarming prospect of the severance of East Ukraine’s economic ties with Russia, announced that he would not sign the agreement with the EU after all. Thereby he set off the Orange protests and the current crisis.

This time, it seems, Ukraine has to make a definite choice. It cannot move toward membership in both the EU and the EAEC. That is unacceptable to both organizations. Ukraine would become the gap through which Russian or Kazakh goods (say) could enter the EU or German or Polish goods enter the EAEC, effectively turning Europe and the post-Soviet region into a single customs union. In fact, Ukraine will not even get observer status at the EAEC if it enters into an Association Agreement with the EU (Interfax-Ukraine, June 14, 2013).

Who are the Blues?

Western capitalist propaganda associates the Blues with the Soviet legacy of corrupt authoritarian rule, inefficient protectionism and opposition to thoroughgoing ‘market reform’. Conversely, some Western leftists react to the pro-Orange slant of that propaganda by viewing the Blues as ‘anti-imperialist’ allies, in accordance with the dubious logic that ‘the enemy of my enemy is my friend’.

The linkage of the Blues to the Soviet past had some basis in the first few years after the collapse of the Soviet system. At that time the dominant parties in East Ukraine were the Communist Party of Ukraine (CPU) and/or the Socialist Party of Ukraine (SPU) (which served as a substitute for the CPU at the period when the CPU was illegal). These parties represented old Soviet officials and managers of state industry who stood to lose their status and privileges in the transition from state to private capitalism.

However, these are now spent forces. Although some new Blue groups have arisen that appeal to nostalgia for the Soviet period – in particular, Natalya Vitrenko’s Progressive Socialist Party of Ukraine – since 2006 the dominant party in the east has been the Party of Regions.

It is hard to understand how anyone could see anything ‘left-wing’ in the Party of Regions. Its funders and parliamentarians include several of the country’s most prominent ‘oligarchs’, including Rinat Akhmetov (the wealthiest person in Ukraine whose diverse assets have been valued at up to $28.4 billion) and Dmytro Firtash (whose main interests are in gas and titanium). The president’s son Alexander Yanukovych has also made quite a pile for himself, no doubt with assistance from his father, although with assets worth only $510 million he is hardly in the same league as the leading players.

Who are the Oranges?

First, the Orange and Blue parties are equally dependent on the financial support of oligarchs (possibly with a few minor exceptions on both sides). The leading Orange oligarch is Igor (‘Benya’) Kolomoisky, whose assets are worth $6.2 billion, making him the second or third richest person in Ukraine. Whatever the programmes of Orange parties may say about ‘fighting corruption’ or ‘level playing fields’, their oligarchic backers are wedded to the business model of ‘crony capitalism’ and most unlikely to tolerate any serious attempt to disentangle business from politics.

Second, there are good reasons to doubt the ‘democratic’ credentials of the Orange camp. Quite apart from the question of the compatibility of genuine democracy with any form of capitalism, the current Orange coalition includes the Svoboda (Freedom) party of Oleh Tiahnybok.

This party, which until 2004 was called the Social-National Party of Ukraine, adheres to the semi-fascist ideology of ‘organic’ Ukrainian nationalism invented by the Organization of Ukrainian Nationalists in interwar Galicia under Polish rule. Although the main base of Svoboda is in West Ukraine, in the 2012 elections it achieved a breakthrough from regional to national politics, winning over 10 percent of votes and 38 out of 450 seats in parliament.

Members of Svoboda are active participants in the current protests. They have been especially active in making practical arrangements for the protests, such as the provision of food, toilets and first aid. (Extreme nationalists – Russian nationalists in this case – seized a similar role in the anti-Putin protests in Moscow.) Svoboda has also claimed the credit for toppling the Lenin monument in Kiev, although it is not clear who actually performed this feat.

The nature of the protests

The Orange-Blue confrontation in Ukraine is basically a conflict between two groups of oligarchs and politicians over the choice of an external orientation of the country – toward Europe and the West or toward Russia and the post-Soviet region.

A Marxian analyst might expect that the interests and connections of the Blue oligarchs would be mainly confined to the post-Soviet region while those of the Orange oligarchs would extend to Europe or even further afield. This hypothesis has yet to be properly verified, but there are certain indications of at least a tendency in this direction.

Thus, according to his Forbes profile, Kolomoisky (Orange) ‘is a prominent international businessman with diversified business interests, including ownership of significant industrial assets worldwide and particularly in CIS countries… [He has] extensive business experience in Eastern Europe’. The corresponding profile for Akhmetov (Blue) focuses solely on his holdings in Ukraine. However, Firtash (Blue) does seem to have significant interests in Europe.

This does not mean that the protestors themselves view their cause in such grubby terms. There is no reason to doubt that the great majority of them sincerely believe that they are fighting for democracy, clean government, the rule of law and European civilization. In fact, many do not support any party or politician. One observer reported from Kiev in late November that two separate rallies were taking place on different squares – one organised by the Orange political parties, the other by ‘young non-partisan activists inspired by the Occupy movement’ (louisproyect.org/2013/12/26/whats-going-on-in-the-ukraine).

Protests have also been held in the cities of East Ukraine, although in the east the Orange parties are not able to muster many supporters – at least by comparison with the big counter-rallies being held in support of the government. Here again, news reports suggest that some protests have been simply in support of democratic rights and against corruption, without signs of allegiance to either the Blue or the Orange camp. So there is some potential at the grassroots for overcoming the regional division and developing a genuinely democratic and eventually socialist politics.