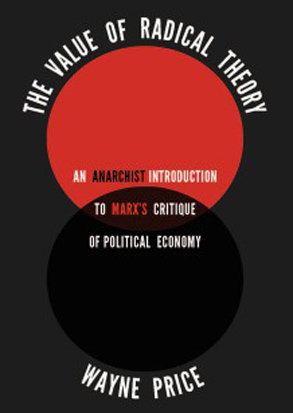 The Value of Radical Theory. An Anarchist Introduction to Marx’s Critique of Political Economy. By Wayne Price. AK Press. 190 pages. £8.95.

We often joke that anarchists know very little about economics and that what little they do know they got from Marx. US class-struggle communist anarchist Wayne Price seems to agree and has written  a short book to explain Marxian economics to his fellow anarchists.

He does an excellent job in explaining the labour theory of value in chapter 1 and state capitalism in chapter 6. The views he expresses in the other chapters, while certainly held by some in the Marxist tradition, are controversial. For instance, that crises are caused by the fall in the rate of profit due to a rise in the organic composition of capital and that this will eventually lead to capitalism’s demise; and that capitalism has been in a state of decline and decay since 1900 and has only been kept going by arms spending, wars and reconstruction after them, and the creation of fictitious capital (a couple of ICC pamphlets figure in the bibliography).

There is a peculiar attempt to include the 17th and 18th century witch-hunts as part of the primitive accumulation of capital; and also a passage (p. 122) which seems to suggest that ‘supervisors’ are not part of the working class (which would exclude a large chunk of those forced by economic necessity to work for a wage or salary).

On the other hand, Price recognises that Marx regarded the terms ‘socialism’ and ‘communism’ as referring to the same society and that he stood (like Price and us) for a classless, stateless, moneyless society of common ownership and democratic and production for use not profit.  His discussion of the differences between Marx and anarchism is intelligent and fair: that Marx tried to ignore morality in presenting the case for socialism; that he envisaged a higher degree of centralisation than anarchists; and that he was not opposed to elections either under capitalism or in socialism.

So, a book that can be useful both for socialists and anarchists. 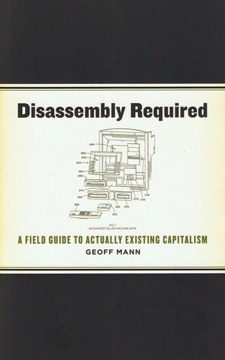 This book succeeds well enough as a description of the way capitalism has functioned in recent years, except that the author subscribes to the view that a bank does not have to have the funds it lends, not even in digital form. This is unfortunate as he gives as one of the defining features of capitalism ‘a monetary system based on the production of bank-credit money.’

Banks are certainly central to capitalism in practice but for collecting unused funds and savings and channelling them to capitalist enterprises as money-capital. Revealingly, when it comes to describing the events that led to the sub-prime mortgage bubble, he does not appeal to the theory that banks create money out of nothing to explain the source of funding for this. He says it came from savers in East Asia. In other words, from previously existing funds.

In the final chapter on what to do about capitalism he reveals that ‘for a long time I was convinced that we could never get beyond capitalism without getting rid of money’ but that ‘I am no longer so sure.’ He still knows, though, that there is no way out under capitalism, not even if a leftwing government comes to power in Greece or Spain and takes the country out of the EU. But even though he knows this won’t improve things (and says it may even make them worse) he still supports this, on the grounds that it is better to have tried and failed than never to have tried at all. Perhaps, but why not try something that has some chance of succeeding rather than setting yourself up to fail?

Mann ends up advocating that what anti-capitalists can best do today is trying to encourage non-money relations between people (which he says does not include LETS or local currencies). So he doesn’t seem to have entirely abandoned his previous view.