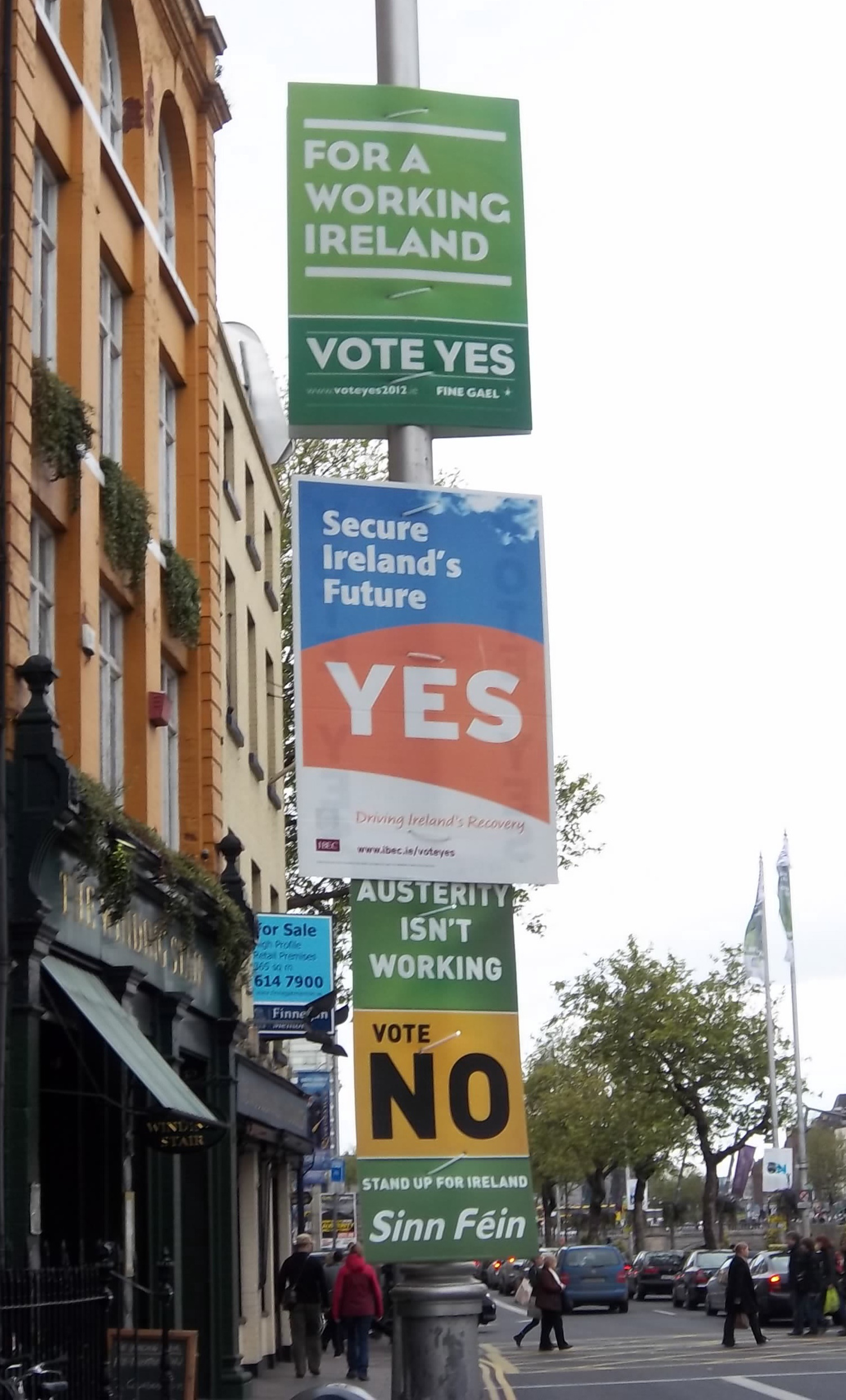 Voting one way or the other was not going to change the reality that capitalism in a slump means extra austerity.

On the 31st May, the electorate of the Republic of Ireland went to the polls to decide on the latest European Union fiscal treaty. The referendum was passed with 60 percent of voters in favour and 40 percent opposed. The Treaty (known as the Stability treaty to its supporters and referred to as the Austerity treaty by opponents) is part of the attempt by Europe to contain the turbulence that has engulfed Euro-zone countries for the past three years. In broad terms signing up to the pact, commits the governments of the signatory countries to limit annual deficits and over the economic cycle to maintain a balanced budget. In return for committing to this, the signatory countries are promised access to the EU’s new assistance fund, the European Stability Mechanism (ESM) if needed in the event that countries cannot raise funds from the capital markets. Most countries within the European Union, both within and outside the Euro-zone, have indicated a willingness to ratify the Treaty and it is expected to come into force early in 2013.

Regarding the campaign that preceded the vote in Ireland, the sides lined up in a predictable fashion. Advocating a Yes were the government (a coalition of the centre-right Fine Gael party and centre-left Labour Party) together with Fianna Fail (long a dominant force in Irish politics but currently much diminished due to their abject handling of the economic crisis that overwhelmed Ireland in 2009) and the majority of big business and farming interests. Conventionally these are regarded as the establishment centre ground.

The opposition consisted of Euro-sceptics from the left and right and single issue political mavericks who customarily appear on these occasions. Leftist opposition primarily consisted of Sinn Fein augmented by the Socialist Party, Socialist Workers Party, Communist Party of Ireland and People before Profit (an organisation that could be characterised as a front for the two ‘Socialist’groups). The rightist component of the opposition in the main came from Declan Ganley and his mysterious Libertas organisation (having minimal membership or popular participation in Ireland and yet amazingly well funded) together with some non-party members of the Irish Parliament and further reinforced with certain publicity-seeking economic commentators. As a whole the trade union movement adopted a position of neutrality though individual union leaders could be found on either side.

The whole context of the debate was framed by the fact that Ireland is currently in receipt of a large loan from the International Monetary Fund and the EU to cover both the government deficit and the huge losses sustained by private Irish Banks due to the property boom (formerly called the Celtic Tiger) that took place in Ireland prior to 2008. The fact that the Irish government (popularly interpreted as the Irish taxpayer/citizen) has had to pick up the tab for 40 billion euros of private debt has proved especially controversial and naturally has caused genuine and understandable bitterness across whole swathes of Irish society. While the initial decision to cover the losses on these private speculative loans was taken by the Irish government, to prop up the banking sector, the continuance of the banking guarantee has been insisted upon by the European Union as a condition of the bail out. Over the past three years, this has been the main bone of contention between the government of the day and the opposition; the former regarding it as unpalatable but unavoidable while the latter demand a tougher stance to be taken on the issue with Europe.

Given the major uncertainty that now exists about the medium term future of the European economy and particularly of the fate of the Euro itself, a trump card for the Yes side was the fact that Ireland may require a second bail-out when the current IMF/EU assistance ends next year and the thus need to ensure access to the EMU fund in that eventuality by backing the Treaty. This almost certainly swayed people who depend directly on the state for their income such as pensioners, public sector workers and those in receipt of social welfare payments. The government also kept repeating the point that passing the Treaty would instil confidence in Ireland from international investors and the subsequent inflow of funds would promote job creation and help the economy to recover.

The No side’s major argument was that passing the Treaty would copper-fasten a monetarist economic strategy and prohibit future governments from stimulating the economy with Keynesian type initiatives. They declared it would result in many years of unbroken austerity to come with inevitable cuts to social services. A more nationalistic message was also put forward accusing the government of being too timid in defending Ireland’s interests and too willing to fall into line with the wishes of the large powers in the EU (primarily meaning Germany) especially in readily subsuming the massive private bank debt into sovereign debt in order to help stabilise the Euro currency.

While the government won the debate with its clear-cut electoral victory, it derived very little political capital from its success as it just ensures continuance of the status quo. A defeat would have damaged its standing, both nationally and internationally so in that sense the referendum was always going to be thankless for them. It’s generally accepted the big winners were Sinn Fein as the lead mainstream organisation on the No side. Irish electoral rules demand equal access to be given to both sides in any referendum on the constitution irrespective of the relative size of either side. Hence Sinn Fein received huge publicity and air time to expound their ideas and the campaign marked a further stage on their long and calculated transition from being the front organisation and principal apologist for an entirely undemocratic terrorist group (Provisional IRA) to becoming an acceptable alternative to the existing political options. During the campaign their spokespeople blended vaguely radical sentiments about taking a tough line with Bankers (both Irish and European) to defend Irish interests while assuring the electorate of their commitment to financial discipline. From that perspective, they are part of a long history of parties who have moved from a nominal, if unconvincing, opposition to capitalism to outright acceptance of it as the only means of ordering society.

The debate associated with the campaign highlighted yet again the fact that many movements claiming to be Labour or Socialist or Left Wing ultimately are only offering a re-ordering of capitalism. The Communist Part of Ireland advocated a No vote and suggested Ireland should borrow money from sovereign wealth funds from countries such as Russia, China, Norway and various Middle East funds as an alternative to seeking to obtain loans from the markets or the European Stability Mechanism on the basis that better terms would be available. Such financial advice to the government of the day is a curious activity for a group with the name of ‘Communist’in its title. Kieran Allen a leading member of People Before Profit and the Socialist Workers Party also attacked the Treaty from a financial standpoint on the basis that it was a ‘bad deal’for Ireland and that its costs would exceed its benefits. He may of course be proved correct but again this viewpoint is devoid of socialist content. He also indulged in the common electoral practise of scaring pensioners about the entitlements they might lose if the Treaty was passed which of course is the type of tactic that all political parties engage in as part of the shoddy custom of drumming up votes from sectors of the electorate. Possibly the most poignant aspect to all of this is that May 2012 marked the 100th anniversary of the formation of the Irish Labour Party in a congress in Clonmel in 1912. One of the resolutions at that meeting committed the new party to the notion ‘that labour unrest can only be ended by the abolition of the capitalist system of wealth production with its inherent injustice and poverty’. While it is not news that such revolutionary rhetoric has long been discarded, it does highlight the fruitless path that these social-democratic parties have followed whereby they are now further away from their original goals than when they first started out.

On one level from a socialist view, the campaign and its result is entirely devoid of interest. There has been a boom and now we have the bust; this is an inevitable part of the capitalist system. Voting one way or the other was not going to change this reality and studies revealed that this was tacitly accepted by the majority of the electorate. The referendum was an example of the sham that is democracy under capitalism; as members of whatever electorate we happen to belong to we are constantly being cajoled to take part in the democratic process when it’s clear that voting will not make any meaningful difference to our future. For the case in point, the prospects for Ireland’s economy and the future of the Euro will not be decided by the result of the Irish referendum but will depend more strongly on economic developments in Spain and the political situation in Greece. Fundamentally as regards the common currency it will hinge on the willingness of German capitalism to persevere with the Euro by balancing the great benefits it bestows to its powerful export sector against the costs it imposes on the wider economy and its ability to strike a bargain with France on the issue.