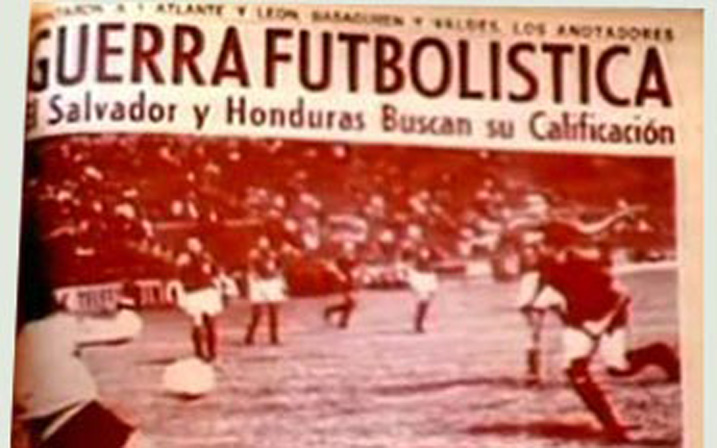 In 1969 rioting by fans during a World Cup match between Honduras and El Salvador appeared to trigger a four-day military conflict –the so-called football war. In fact, the Salvadoran generals merely used the rioting as a convenient occasion for launching a planned attack on Honduras. The main cause of tension was land disputes between Salvadoran migrants in Honduras and local farmers.

Nevertheless, competitive sports like football do have connections with war. The Duke of Wellington is supposed to have said that the Battle of Waterloo was won on the playing fields of Eton. The connections are especially striking where competing teams represent different nations and the memory of past wars is still fresh –or is artificially revived by nationalist politicians and publicists.

The Euro 2012 soccer finals, co-hosted by Poland and Ukraine, offer a veritable feast of national and racial hatred. When Russia played the Czech Republic in Lvov (western Ukraine) on June 8, Russian fans threw lighted fireworks and fought Ukrainian fans. When Russia played Poland in Warsaw on June 12, Russian fans clashed with Polish fans and police, leaving 15 injured. Fans from several East European countries have made black players on West European teams targets of racial abuse. And so it goes on.

The East European media have played their part in fomenting hatred. For example, on the eve of the Russian-Polish match Polish newspapers took care to remind their readers of the ‘Miracle on the Vistula’–the victory of Polish arms in the war of 1920 with Bolshevik Russia.

When talking about ‘football hooliganism’ it is important to distinguish between spontaneous acts by excited fans and the much more serious violence orchestrated by the gangs or ‘firms’ that are attached to many football clubs. These firms are paramilitary organizations that supply commanders, provide training in armed and unarmed combat and conduct preliminary reconnaissance of unfamiliar terrain. They are often infiltrated or even controlled by ultra-nationalist political groups that recruit among fans.

On June 13, The Sun Today described a training and indoctrination camp set up on an abandoned Soviet military base near Ivano-Frankivsk in western Ukraine by Patriot of Ukraine –the paramilitary auxiliary of the fascist Social-National Assembly (SNA). The SNA website (sna.in.ua) –under the motto ‘Strength! Order! Wellbeing!’–explains that Patriot of Ukraine is “the revolutionary avant-garde of the Ukrainian social-nationalist movement”and was established to “purge the nation”and guard the SNA.

The SNA is related to the All-Ukrainian Union ‘Freedom’ (Svoboda), which has captured control of large areas of western Ukraine, including Lvov and other cities, and is poised to enter the national parliament. Both have their origin in the old Social-National Party, but Svoboda has cultivated a more respectable image. You can find videos of their torchlight marches through Ukraine’s cities at http://www.globalpost.com/dispatch/news/regions/europe/120329/ukraine-svoboda-nationalist-party-nazi-echoes-hitler-pt-2.

The ‘national identities’ inculcated through competitive sports impart a sense of meaning and importance. They offer an illusory escape from humdrum lives. For the ‘hooligans’ there is also the temporary emotional release and addictive adrenalin rush of acted-out aggression –cheaper and perhaps less risky than alternatives such as drugs. The identity and meaning are sham, because ordinary working people live much the same lives and face much the same problems everywhere. National identities have nothing to do with real life. But they do the ruling class a great service by blocking any alternative identity rooted in real life –an identity capable of uniting working people throughout the world in the fight for a life from which we will not feel the need to escape.