The political scene is really buzzing up in Scotland. The Labourites are in 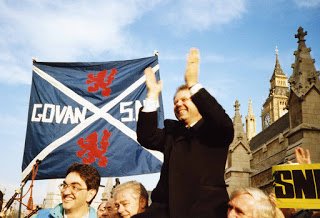 turmoil over the issue of Scottish independence while the Scottish National Party is split because of something called the Constitutional Convention. To add to the fun Militant is up to its old tricks and there is a brand new “socialist” party with the usual stale ideas.
After the last general election when the Tories won only 10 of the 72 seats in Scotland the SNP floated the idea that the anti-Tory forces should join in forming a convention of MP’s, councillors, churchmen and trade unionists which would draw up a plan for Scottish self-government within the United Kingdom. This, it was argued, would gain Scotland some protection from unrepresentative Thatcherism.
Preliminary talks in January between the SNP, Labour and the SLD began amicably enough but then the SNP delegation suddenly walked out. They probably felt that, after their Govan by-election victory, the convention no longer had anything to offer them and they should go for outright “Independence Within Europe”. This move outraged several prominent SNP members who condemned the leadership for having made a bad error of judgement. The Scots electorate, they said, is so desperate to be rid of Thatcher that they will not forgive the SNP for abandoning the convention.
Isobel Lindsay, a member of the executive, pointed to the immediate drop in SNP support in the opinion polls and added “perhaps even more important . . .  we are alienating Scotland’s thinking classes . . .” (Glasgow Herald 7 February 1989). Lindsay is a university lecturer. In the end the walkout was backed by the party’s national council by a big majority but rumblings of discontent continue.
Labour’s Troubles
What about Labour’s troubles? The party’s neo-nationalist wing, which includes several MP’s and leading trade unionists, is openly calling for Labour to lead a Scottish UDI from the United Kingdom should England vote the Tories in again. This revolt forced Neil Kinnock to declare his support for devolution at this year’s Scottish Labour Party conference although he didn’t even mention it last year, an omission which doubtless had nothing to do with the SNP’s low standing in the polls at that time.
Almost obscured by these events is the formation of the Scottish Socialist Party, the latest breakaway from Labour. The new party has about 100 members and believes that the only way for Scots to get rid of Thatcherism is the creation of an independent “socialist” Scotland. Alex Wood, former Labour leader of Edinburgh District Council, and an SSP leading light, gives us his idea of what socialism means.

He firmly believes the time is right for a socialist approach to Scottish life, such as public housing, free education and a national health service (Glasgow Herald 12 January 1989).

In case anyone is wondering why Wood bothered to leave the Labour Party he says it was because, among other things. Labour has rejected the socialist transformation of society. Since he also tells us that Labour was never a socialist party anyway then what else did he expect?
The SSP says that it will appeal to disenchanted nationalists and on cue they have been joined by Alan Clayton, a prominent SNP member. He denounced the SNP’s withdrawal from the convention as “shameful” and told them the correct policy would have been to stay and fight from within it. Why he didn’t stay and fight from within the SNP he didn’t say. The SSP will soon follow into oblivion its predecessor, the Scottish Labour Party, formed by Sillars in 1976 and died in 1980.
Mindless Militants
Meanwhile Militant’s long-running efforts to take over the Labour Party in Scotland have produced results — all of them bad. Their tactic of flooding local Labour parties with recruits and then using them to deselect Labour MP’s and councillors who don’t toe the Militant line has hit a snag. Why? Because the Labour Party will not sit back and let this happen. For example 158 applicants in Pollok have been refused membership and it is Militant members who are getting the push. Three have been expelled in Cumbernauld with more to follow in Livingston and Cathcart. More seriously for them 13 alleged Militant “supporters” in their Pollok stronghold have been suspended and expulsions are a certainty. To rub it in all their candidates for office in Leith were defeated.
These antics make us think of a no-contest between two grossly mismatched boxers. In this corner the Labour heavyweight, and in the other corner the Militant flyweight. No matter how many times the flyweight gets flattened he gets up and comes back for more. He’s game but is he wise? Does Militant really think the Labour Party will let them take it over? And what would they do with it if they got it? Do they imagine that significant numbers of Labour voters would vote for Militant policies? Maybe they’re just punch-drunk enough to say “yes”.
In conclusion, will the present nationalist upsurge in Scotland collapse like the previous one in the 1970’s? This is unlikely because of the Thatcher factor. Another Tory victory at the next election along with their continued rejection in Scotland will cause many Labour leaders, activists and supporters to decide that full independence is the only hope. Margaret Thatcher is a better propaganda weapon for the SNP than North Sea oil ever was.
Vic Vanni