The Nature of Russian Society 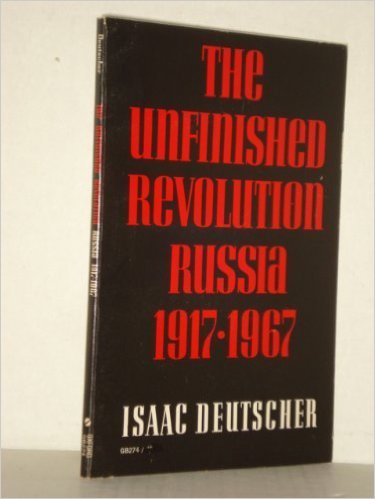 Every Revolution creates its own myths. The French revolutionaries thought that all privilege had been abolished when kings, nobles and priests had been dealt with. Even today in America the dominant ideology denies there is a class system there. And so in Russia where the official mythology proclaims a classless society. But even many who are critical of the government there argue that it is wrong to talk of Russia as a class society. Among these is the late Isaac Deutscher. Deutscher, a freelance Trotskyist, was invited to give the George Macaulay Trevelyan lectures in Cambridge this year. He chose to outline what can be called the orthodox Trotskyist theory on the nature of Russian society. This may have been new to Cambridge professors but it is old hat to Socialists. All the same, since Deutscher, like Trotsky, can write well the arguments are worth going over again.

Deutscher closely follows Trotsky (1). Owing to Russia’s economic backwardness and political isolation a bureaucratic caste (not class) was able to usurp power. This bureaucracy cannot be said to be a class as its privileges are not based on property. Their relationship to the nationalised means of production is the same as that of the working class. Its privileges appear in the consumption not in the production of wealth.

“What this so-called new class lacks is property. They own neither means of production nor land. Their material privileges are confined to the sphere of consumption. Unlike the managerial elements in our society, they are not able to turn any part of their income into capital: they cannot save, invest, and accumulate wealth in the durable and expansive form of industrial stock or of large financial assets. They cannot bequeath wealth to their descendants; they cannot, that is, perpetuate themselves as a class.”

Deutscher was of Polish origin. By co-incidence two young Poles, now in jail, Jacek Kuron and Karol Modzelewski, provide a complete answer to his points in their Open Letter to the Party written in 1965:

“It is said that the bureaucracy cannot be a class, since the individual earnings of its members do not come anywhere near the individual earnings of capitalists; since no bureaucrat, taken by himself, rules over anything more than his mansion, his car and his secretary; since entrance to the bureaucratic ranks is determined by a political career and not by inheritance; and since it is relatively easy to be eliminated from the bureaucracy in a political showdown. This is quite wrong. All the above arguments prove only the obvious: The property of the bureaucracy is not of an individual nature, but constitutes the collective property of an elite which identifies itself with the state. This fact defines the principle of the bureaucracy’s internal organisation, but its class character does not depend on its internal organisation or its mores, only on its relationship—as a group—to the means of production and to other social classes (above all, the working class). “ (our italics).

That a privileged class could own property collectively seems to have escaped both Trotsky and Deutscher. Perhaps because they attached too literal a meaning to “private property” (after all, in English, private often means individual), they held that nationalisation abolished privilege based on property. Whereas in fact nationalisation is just another form of sectional property. Marx himself, in an early essay discussing the role of the Prussian bureaucracy. showed that he realised a class could own property collectively (2). Kautsky knew this too. Discussing what, in Western Europe, is the classic case — church property in feudal times — he wrote that after the priests had suppressed the primitive democracy of the early churches “it goes without saying that the property of the community now became in fact the property of their administrators, though not their personal property, but that of the bureaucracy as a Corporation” (3). Some Trotskyists even realised this. But the most thorough examination of this species of sectional property was done by Karl Wittfogel (4). He spoke of “political property”. Kuron and Modzelewski have “bureaucratic property”. But whatever it is called this relationship is clearly a form of class monopoly over the means of production.

In their first four chapters the two Poles brilliantly argue the case that Poland (and, by implication Russia) is a class society; that the working class and peasantry are exploited by the elite “who occupy conspicuous positions in the (Party) hierarchy and who collectively make basic decisions” (a group they call the central political bureaucracy). They show how the working class are propertyless and so have to sell their mental and physical energies to this bureaucracy for wages in order to live. They show too how the peasants are deprived of all surpluses above subsistence so that cheap food is available to keep wages down in industry. They conclude that the way out for the working class is to overthrow by force the bureaucracy and introduce genuine democracy into administration and industry.

Deutscher shares this aim. But because he denies that Russia is a class society he thinks that this change will come about not through a political struggle of the working class but as a result of the evolutionary process he sees now going on. His arguments here are very weak. He says that while managers in the West are responsible to the shareholders

“Soviet managers have not only to acknowledge that all shares belong to the nation, but to profess that they act on the nation’s behalf, and especially on behalf of the working class. Whether they are able to keep up this pretence or not depends solely on political circumstances. The workers may allow them to keep it up or they may not. They may, like a sluggish lot of shareholders, accept bad managers; or they may dismiss them. In other words, bureaucratic domination rests on nothing more stable than a state of political equilibrium. This is — in the long run — a far more fragile foundation for social dominance than in any established structure of property relations sanctified by law, religion, and tradition.”

But neither Kuron and Modzelewski (nor we) would argue that it is the managers of industrial concerns who are the privileged class in Russia. They, like those in the West, are really a very highly-paid grade of worker. In Russia they, like the working class generally, must take orders from the bureaucracy (the real equivalent of the shareholders).

Deutscher’s argument that the rule of the bureaucracy is less firm than that of the capitalist class in the West has even less merit. For it is true here also that capitalist class rule “rests on nothing more stable than a state of political equilibrium”. Here the capitalist class rule primarily because their rule is accepted and endorsed by the vast majority of workers. In fact surely it is they who are in the weaker position. For as a result partly of past working class struggles and present working class understanding and organisation they are forced to seek, every now and again, a mandate to rule from the working class. The Russian ruling class has to undergo no such indignity. They have all the means they need ruthlessly to suppress any opposition — which they don’t hesitate to use. Kuron and Modzelewski disclose that as late as 1962 tanks were used against workers in Novocherkassk, a small town near Rostov in southern Russia. For the working class to get the ruling bureaucracy off their backs requires quite as much political knowledge and organisation as we need to get the traditional capitalists off ours. Indeed, it requires more for first they must establish elementary rights of expression and association. In fact their struggle, and ours, are part of the same movement of the working class the world over to free themselves from exploitation and oppression.